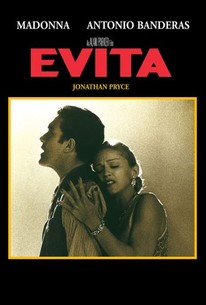 Critics Consensus: Evita sometimes strains to convince on a narrative level, but the soundtrack helps this fact-based musical achieve a measure of the epic grandeur to which it aspires.

Critics Consensus: Evita sometimes strains to convince on a narrative level, but the soundtrack helps this fact-based musical achieve a measure of the epic grandeur to which it aspires.

Critic Consensus: Evita sometimes strains to convince on a narrative level, but the soundtrack helps this fact-based musical achieve a measure of the epic grandeur to which it aspires.

As told by the story-teller Che, Eva Peron was born Eva Duarte, the illegitimate daughter of a penniless farmer. Still a teenager, Eva attaches herself to a popular tango singer, Agustin Magaldi and accompanies him to the Big City: Buenos Aires. Ambitious to succeed, Eva becomes an aspiring radio and film actress, eventually moving into influential circles within Buenos Aires society. Once her name is linked with the rising politician Juan Peron, tongues begin to wag, but the couple marry and Peron is elected President with the inspirational Eva at his side. Eva establishes herself as an ardent supporter of Peronism and promotes her unique blend of democracy with her "Rainbow Tour" to Europe. Attracting attention like no other woman before or since, Eva Peron hypnotized a nation of eighteen million people for seven years before her untimely death at the age of 33 in 1952.

Mara Bestelli
as Starlet at Audition

Mónica Lairana
as Starlet at Audition

Laura Miller
as Starlet at Audition

All in all, Evita is worth your time and money.

It's just a sluggish, contradictory mess, a drably "realistic" Latin-revolution music video driven by a soundtrack of mediocre '70s rock.

With one of the most dazzling screen chassis in years, Evita is definitely worth a look -- maybe even two. But don't look under the hood.

Evita allows the audience to identify with a heroine who achieves greatness by -- well, golly, by being who she is.

After all the painstaking verisimilitude the movie neglects its characters. Evita the woman shrinks. It's the background we react to-especially the crowd, with its power to applaud or boo.

No matter how great all the constituent elements were, [it couldn't] survive the kind of stiff, wholly artificial and forced performance that Madonna gives.

A pretty much ideal big-screen adaptation of the material, which becomes convincingly cinematic. [Blu-ray]

Webber's music is hauntingly original and effective, while Rice's lyrics manage to convey the information that's missing without a standard narrative and scenic construction, while also incorporating a constant sense of interpretation.

At a time when songs showcased in movies were being shot as MTV music videos, leave it to director Alan Parker (The Commitments, Fame) to offer a full-blooded musical with epic elegance on its mind.

I doubt any director could have made a good movie from Andrew Lloyd Webber's baffling and shallow musical.

It is quite possible to hate Cats and deplore Sex and still enjoy this movie.

What makes "Evita" so powerful is its ability to convey complex emotions through its music.

Even though the protagonist is a flawed, intriguing demagogue, this visually stunning but tiresome (and oversung) musical makes it hard for us to care, given how insufferable most of the songs are (except for two or three), like nearly everything made by Andrew Lloyd Webber.

This film includes the largest amount of costume changes in history, so you already know it's lavish. Taking all the leather and lace away from this production, you're left with no plot, all music, and two hours of watching Madonna spiral into an abysmal performance. Eva Peron, Evita to her people, deserved a bit more of a bang for her buck.

Haha! Antonio Banderas' part was the best bit. I think his kind of phantom character/ narrator role was very good and witty. And I thought Madonna did a fantastic job, too bad she hasn't done that since with acting. With a more analytical look, I thought it interesting the two (technically) main characters were white, Madonna and Pryce. But in Madonna's defense, she can sing and dance really well and pulled off the look very well. The biggest thing that grated on me what the full on opera-style musical. And the fact it's and Andrew Lloyd Webber musical wears on the brain a bit. >_<

The impressive production by Andrew Lloyd Webber, lyrics by Tim Rice brought to screen by an impressive cast. There may have been doubt over Madonna being a lead in this film during it's release, when in actual fact I can not imagine anyone else portraying Eva Peron in quite the same way. Antonio Banderas gives a charmed performance as Che (perhaps his best role to date) who is cleverly worked in to all the scenes to act as a Narrator. Eva Peron?s ambitions were, perhaps, ahead of her time for a woman of that era and shows quite an honest account to the life she lead up until her early demise. Fans of this film or Musical Theatre in general, should definitely watch the stage show which is equally impressive.