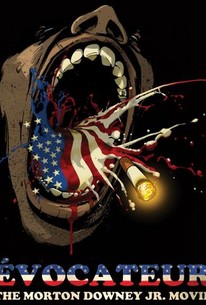 Before entire networks were built on populist personalities; before reality morphed into a TV genre; the masses fixated on a single, sociopathic star: controversial talk-show host Morton Downey, Jr. In the late '80s, Downey tore apart the traditional talk format by turning debate of current issues into a gladiator pit. His blow-smoke-in-your-face style drew a rabid cult following, but also the title "Father of Trash Television." ÉVOCATEUR: THE MORTON DOWNEY JR. MOVIE dissects the mind and motivation of television's most notorious agitator. (c) Magnolia

Critics Consensus: The Internship Could Use Some Work

A new documentary on the late trash-talking TV host Morton Downey Jr. suggests he might have been putting one over on both the world and himself.

There's no revisionist lionizing here, but plenty of perspective.

This sharp documentary tribute to Downey's bug-eyed, fulminating charisma - he was like a Nixon who'd let out his id - reveals the demons that drove him to fame, then dragged him down.

The film does an excellent job of showing how hate-TV was molded in the image of snarling, chain-smoking, guest-berating Downey.

Assorted celebrities and Downey's producers offer some insights, but the movie dwells too long on a group of worshipful former audience members.

He was the perfect by-product of the Reagan era and, as Evocateur reminds us, someone rabid, right-wing broadcasters should gratefully praise every day of their lives.

The portrait of the controversial media figure, a love him or hate him type, is good enough to give us a somewhat fair portrait, considering the three directors were once fanboys.

This documentary probably raises more questions than it answers, but it does give a fair portrait of a very interesting character.

The film argues that Downey's story is at once banal and outrageous, predictable and (sometimes) surprising.

Without taking his side, "Evocateur" makes us feel genuinely terrible for him.

Using archival footage, including what appears to be home movies, a fascinating picture is painted of this obnoxious opportunist who, in his own way, changed the face of television.

Son of a successful Irish tenor, Morton Downey, Jr. fails at music but briefly finds notoriety as the "father of trash television" when he reinvents himself an angry, chain-smoking talk show bully. 15 unpleasant minutes of fame are stretched to 90 minutes; the takeaway message is, Downey was a jerk.