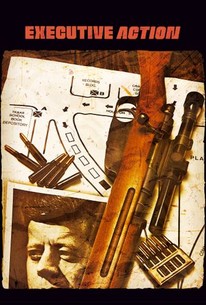 If you think that Oliver Stone invented the "political paranoia" movie, take a glance at Executive Action sometime. Based on Mark Lane's Rush to Judgment, the conspiracy theorist's bible, Executive Action perpetuates the popular urban legend that John F. Kennedy was assassinated at the behest of a right-wing cartel with military and industrial interests. The film further hypothesizes that Lee Harvey Oswald not only didn't pull the trigger, but was also set up as a disposable dupe (this notion wasn't even new in 1973). Burt Lancaster, Robert Ryan and Will Geer play the sinister conspirators. In the film's coda, still photos of 18 witnesses to the assassination are shown, while the accompanying text informs us that all of these people had died between 1963 and 1973. We are further told that the odds against this coincidence are one in a trillion. When Oliver Stone's thematically similar JFK came out in 1991, viewers with long memories were quick to notice the eerie similarities between the Stone film and Executive Action -- right down to choice of camera angles. Hmmm....a conspiracy, perhaps?

Will Geer
as Ferguson

Dick Miller
as Riflemen Team B

John Brascia
as Riflemen Team B

William Watson
as Technician Team B

Richard Bull
as Gunmen Team A

Lee Delano
as Gunmen Team A

Edward Kemmer
as Reporter
View All

This is essentially a dramatized rewrite of all those old assassination conspiracy books.

...an erratic yet fairly watchable bit of 1970s conspiracy filmmaking.

By and large, this is an engrossing picture.

The film, a worthwhile watch, was ignored by both the public and media.

While not thoroughly convincing it is consistently engrossing.

Long before Oliver Stone's conspiracy theory movie, JFK, there was this movie, Executive Action. Worth watching for it's provocative theory that President John Kennedy was assassinated by a band of wealthy right-wingers for their personal gain. Unfortunately, Burt Lancaster and Robert Ryan, great actors, seem to go through the motions. But, the story is engaging, especially for fans of political intrigue.

This was really the first mass media piece to put out a conspiracy theory about the Kennedy Assassination. Unfortunetly it was banned and shunned almost right away. The film admits from the start that it blurs some facts and details with Dalton Trumbo's imaginative non-fiction. It's hard to believe that this came out only 10 years after said watershed event, considering how much attention Oliver Stones "JFK" got for being contraversial almost another 20 years later.