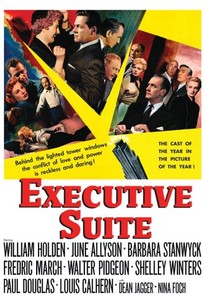 Cameron Hawley's novel of corporate in-fighting and gamesmanship was brought to the screen by producer John Houseman and director Robert Wise, working successfully in the slickest MGM style. When Avery Bullard, the hard-charging president of Tredway, the third-largest furniture maker in the United States, dies suddenly at the end of a business week, it sets off a scramble among the surviving vice presidents to see which of them will succeed him. Among the latter, the best positioned to take the job is Loren Shaw (Fredric March), an ambitious bean-counter-type who is more concerned with the profits that the company generates than the quality of what it produces. Opposing him are Frederick Alderson (Walter Pidgeon), Bullard's longtime right-hand man, and McDonald Walling (William Holden), a forward-thinking idea man brought in by Bullard but never given a wholly free hand (mostly thanks to Shaw). But Alderson's age works against him, as does his seeming lack of leadership -- and Walling is not ready (or so he thinks) to take the president's job, nor does he really want it. Caught in the same dilemma are Walter Dudley (Paul Douglas), the head of sales, who is being quietly blackmailed by Shaw over an affair with his secretary; Jesse Grimm (Dean Jagger), a production man who has always been distrustful of Walling's new ideas; and George Caswell (Louis Calhern), a duplicitous corporate player who will do anything -- including compromise the future of the company -- to protect his own financial position. And possibly holding the balance of power between them is Julia Tredway (Barbara Stanwyck), the daughter of the company's founder (who committed suicide during the Great Depression) and a major shareholder, whose unrequited love for Bullard clouds all of her thinking about the company. And caught in the middle of their struggle -- which literally has a clock ticking, toward the opening of business on Monday morning -- are the thousands of employees of Tredway, represented by a handful of fine character actors, whose jobs and futures hang in the balance over who wins this fight.

May McAvoy
as Grimm's Secretary

Cameron A. Grant
as Salesman

Here is a magnificent motion picture that meets the standard of greatness on almost every count. Running a fast 103 minutes, Executive Suite holds the viewer from the opening scene, building absorbingly to a smashing climax.

The rare Hollywood film that focuses entirely on a business setting, Executive Suite is both a typical drama of its day and an odd egg of a movie.

The dramatics are riveting, though it's all superficial.

A great movie about corporate competition, and with great actors too.

Very good 50's corporate drama. Top cast all give fine perfomances. Holden and June Allyson are well matched and Barbara gives her all in her few scenes.

When Executive Suite started and the credits rolled off the names that made up the powerhouse cast (finishing with directing credit going to the late, great Robert Wise) I thought I was in for a greatly underrated and overlooked classic. When the end credits rolled I by no stretch of the imagination felt the same way. The first half hour to 45 minutes of Executive Suite started off strong enough but eventually turned into an instructional video about how to helm a hostile takeover. The cast was good enough even if there wasn't nearly enough Barbara Stanwyck. Not enough of my interest was held for me to get the details but by the time William Holden delivered that Rynd-esque speech at the end I didn't really care enough to recommend this movie. But then again my DVR cut off at the very end.

McDonald Walling: If you want to stab a dead man, why don't you do it yourself, instead of having someone else do it for you?

Julia O. Treadway: Get out of here.

McDonald Walling: Go on, sell out! Smash everything he lived for. That's what you want to do, isn't it? Pay him back for loving the company more than he could love you?

Julia O. Treadway: Will you get out of here!

When John Houseman serves as the producer of a film, I most assuredly sit up and pay attention. Houseman's acumen as a producer, as a director, as a production assistant to the likes of Orson Welles on Citizen Kane, and even more visibly as a stage and screen actor on projects such as The Paper Chase, is extremely keen. Okay, so there are some poor moments in this film. The one clinch-and-break scene quoted at the top here is a prime example. Overall, however, William Holden's acting lifts this cunning portrait of corporate business mentality to a whole new higher plane. What do you think?

On the heels of having watched Stalag 17 for the umpteenth time last week, a role for which Holden was nominated for Best Actor, I have to say that, in my first viewing of Executive Suite, he's even better here. You watch this and you know why he rose to the top of the Hollywood acting food chain. Contrast the very wooden moment cited above with his dressing down of the Treadway board of directors scene just before the movie ends, and you will see Mr. Holden on absolute acting fire.

And in the scene immediately following, you'll watch Barbara Stanwyck absolutely dominate the landscape in a face-to-face with June Allyson. It's as if you're watching a split screen of two different movies. Stanwyck stands out in full 3-D relief; Allyson is almost a paper silhouette, a kind of Javanese shadow puppet by comparison. Additionally, Fredric March and Shelley Winters prove why they went as far as they did in the acting business.

What a wonderful, if uneven, film. Mr. Houseman, you are truly missed. Gotta add William Holden to my all-time favorite actors list pronto : )