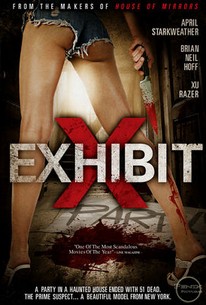 A party held in one of the most haunted houses in the country as a publicity stunt to launch a new liquor company ended with 51 people dead. The police arrived on the scene to find the house on fire. They managed to rescue one person from the blaze, a beautiful model from New York who is not the prime suspect in the murder trial. A camera containing footage from that night was also found in the house and delivered to investigators. This is the restricted footage leaked by a jury member in one of the most infamous murder trials in US history and the first of its kind of include paranormal evidence.

There are no critic reviews yet for Exhibit X. Keep checking Rotten Tomatoes for updates!

There are no featured reviews for Exhibit X at this time.