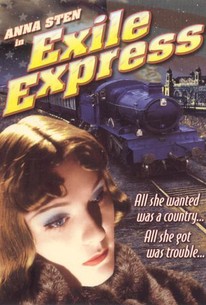 Exile Express was the last film produced by Grand National Pictures, and a worthy farewell it was. Anna Sten, former Sam Goldwyn protegee and the wife of Exile Express producer Eugene Frenke, stars as Nadine Nikolas, a young European girl whose chances of becoming an American citizen are scotched when she is implicated in a murder. About to be deported, Nadine is rescued by reporter Steve Reynolds (Alan Marshall), who suspects that the killing was engineered by a gang of international spies. One delightful scene permits the haughty Ms. Sten to "let herself go" by dancing an energetic jitterbug. Directed by Universal contractee Otis Garrett, Exile Express is a satisfying blend of comedy, romance, and edge-of-the-seat suspense.

Spencer Charters
as Justice of Peace

There are no featured audience reviews yet. Click the link below to see what others say about Exile Express!