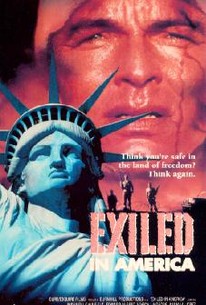 This political drama takes a look at the underground network that helps South American refugees travel safely to the US. The story centers on a freedom fighter from Central America who uses the underground to get to the US and settle in a small town. His wife lies to a restaurant owner, telling him her husband is dead, and gets a job as a waitress. Soon after, the owner's son falls in love with her. Meanwhile a crooked CIA agent leads a death squad in pursuit of the former freedom fighter and things get worse when the local sheriff threatens to reveal his hideout to the hunters.

Marilyn Hassett
as Beverly
View All

There are no critic reviews yet for Exiled. Keep checking Rotten Tomatoes for updates!

There are no featured reviews for Exiled at this time.