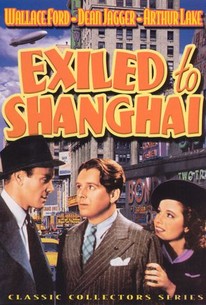 Exiled to Shanghai uses the then-waging wars in Spain and China as backdrops for a familiar "rival reporters" yarn. Wallace Ford plays Ted Young, a brash newsreel cameraman who is fired by his dyspeptic editor Fred Sears (Dean Jagger) for photographing the wrong general during the Spanish Civil War. Down but not out, Ted embraces a new form of technology, establishing the first television newsreel service (and this was two years before commercial TV made its "official" American debut at the New York World's Fair). As a result, Ted is rehired and promoted to editor, while poor Fred ends up being transferred to China (hence the film's title). While all this is going on, Ted and Fred still find time to battle over heroine Nancy Jones (June Travis). A pretty good film on its own merits, Exiled to Shanghai has gained curiosity value by virtue of its use of TV journalism as a dramatic device.

Sally Payne
as Mabel
View All

Critic Reviews for Exiled to Shanghai

There are no critic reviews yet for Exiled to Shanghai. Keep checking Rotten Tomatoes for updates!

There are no featured reviews for Exiled to Shanghai at this time.