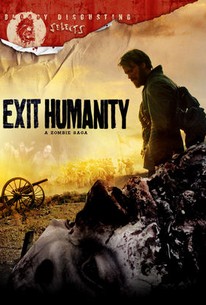 In the aftermath of the Civil War an unexplained outbreak of the walking dead claims the life of Edward Young's wife while his son disappears. This sets him off on a harrowing journey into the plagued countryside. Facing off challenges not just from the ferocious undead but also from the living, will Edward find an exit to the grotesque caricature of what humanity has become? The War might be over but the fight has just begun.

Filled with too many ideas struggling to rise to the surface...

While the spareness and seriousness of the film are to be admired, and Gibson makes for a sympathetic protagonist, there is little here that we have not seen before (even if it may have been set after), and even less that rivets the attention.

Unexpectedly lofty and well-produced, but overlong and not ado about enough.

A sumptuous period piece zombie drama, superbly shot and with good production values that ultimately faceplants itself on corny drama, cheesy acting, horrid soundtrack and not much novelty to be had. What it does, it does so well, from the animations to the cinematography to the way some scenes unfold but it's all too messy and most of these elements just don't fit together at all in the end. Worth a shot for fans of the genre but even so, there's not enough here to elevate itself above the mediocre or even hope to achieve the classics it so desperately tries to. And crap, is the lead still screaming? Oh... yes... yes he is... *sigh*

Not as good as Rammbock, but still a pretty good zombie flick!