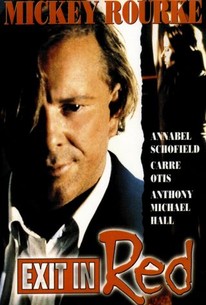 In Yurek Bogayevicz's Exit in Red, Mickey Rourke plays Ed Altman, a Beverly Hills psychiatrist who moves to Palm Springs in order to escape sexual harassment charges. Instead, he has an affair with a wealthy married woman named Ally (Annabel Schofield) who is planning to frame Ed for the murder of her husband, which she is planning with her crazy lover Nick (Anthony Michael Hall). To punish Nick for his complicity in the setup, Altman makes him drive through the desert wearing several layers of winter clothing before putting him in the trunk and shooting him in the nose. This occurs after Altman is able to escape from the police because a truck just happens to crash through the wall of the police station. The whole thing ends with a triple-cross of Nick by Ally and a bloody shootout which only Altman survives.

Johnny Venocur
as Cop
View All

Critic Reviews for Exit in Red

There are no critic reviews yet for Exit in Red. Keep checking Rotten Tomatoes for updates!

Audience Reviews for Exit in Red

There are no featured audience reviews yet. Click the link below to see what others say about Exit in Red!