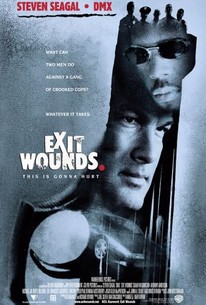 Critics Consensus: It probably goes without saying that Exit Wounds is loaded with plotholes and bad dialogue. Critics also note that Seagal has aged rather badly.

Critics Consensus: It probably goes without saying that Exit Wounds is loaded with plotholes and bad dialogue. Critics also note that Seagal has aged rather badly.

Critic Consensus: It probably goes without saying that Exit Wounds is loaded with plotholes and bad dialogue. Critics also note that Seagal has aged rather badly.

Returning to his action feature terrain after a short hiatus, Steven Seagal plays Orin Boyd, a maverick Detroit detective with an unconventional way of taking down foes. After a failed intervention in a terrorist kidnapping case that humiliates his superiors, Boyd -- who is hailed as a top-drawer investigator but frowned upon for his tactics -- is forced to do time in a tough downtown precinct. After discovering the covert drug operation performed by several corrupt cops at his new assignment, he decides to break the rules yet again. While the cops are planning a massive heroin deal with big-time gangster Latrell Walker (DMX), Boyd finds that Latrell is not who he once was, and Boyd persuades him to assist in bringing an end to the amoral police influence that helped ruin him. Exit Wounds is the second film from cinematographer-turned-director Andrzej Bartkowiak (Romeo Must Die) and also features Tom Arnold, Isaiah Washington, and Jill Hennessy.

New on Netflix October 2019
Street Fighter Cast Adds Michael Clarke Duncan, Chris Klein, Others
Critical Consensus: A Brave New "World," A "Step" Down, And No Screenings for "Pulse" and "Zoom"

Seagal -- who turns 50 in a few weeks -- has been inactive for the past few years, and it shows.

Via a combination of undeniably smart action moves and a hitherto absent sense of stoic self-deprecation, Seagal is once again back on form.

In its low grade way, this blithely brutal cops and drugs thriller is an efficient hot wire entertainment.

The movie's just an excuse for the entire cast to point guns at each other before engaging in verbal or actual smackery.

Orin Boyd is a cop who "doesn't obey the rules" and although his boss considers him to be "one of the best", he must be transferred to one of the roughest precincts in town.

With a plot that can be roughly described as Serpico for people who never outgrew The A-Team, Seagal beats and bangs up Detroit single-handedly.

Anyone who experienced Seagal's films when he was in his prime will know that he is to acting ability what Robin Cook is to personal magnetism.

The film does exhibit a major problem typical of book adaptations; it's overburdened with plot and supporting characters.

Seagal plays he usual style role of a renegade cop with no respect for authority. DMX is a gangster with whom Seagal teams up with to find out who has stolen fifty kilos of heroin from the vaults of a Detroit police vault. The teaming up of a hard cop and a hard gangster in a different take on the buddy cop genre was a nice idea, but it raises too many plot flaws and the duo don't have the comedy timing to make it work well. Exit Wounds does entertain with it's action and thrills, but its ultimately forgettable.

Doesn't stand out like it should in the overpopulated world of Seagal films and perhaps only got the audience and attention it got because it had the then-redhot DMX co-starring in it, whom I have a hard time believing could kick Seagal's ass in a fight, much less stand toe-to-toe with him. Has a good cast that would've given this film a higher rating, but I took a half a star off for having the Law & Order-killing Anthony Anderson in it (Just kidding about the star part, but not about Anderson).

Rough movie, but the opening bridge explosion scene was filmed in my hometown of Calgary, so I had to check it out.