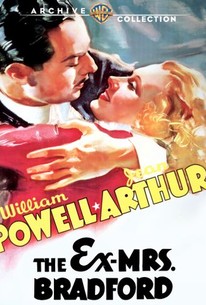 The "ex" of the title is daffy mystery-writer Jean Arthur, former wife of urbane doctor William Powell. When Powell becomes the prime suspect in a murder case, Arthur endeavors to solve the case herself -- and to reclaim her ex-hubby in the process. After a well-directed semiclimax at a race track, the killer is revealed during one of those expository scenes in which all the suspects are gathered together in one room. The murderer attempts to escape, and Powell is knocked cold in the process. When he awakens, he discovers that Arthur has set up some projection equipment, and is running a film of a minister reciting the wedding vows. Curses! Trapped again! Like William Powell's previous RKO effort Star of Midnight, The Ex-Mrs. Bradford was an attempt to cash in on the popularity of Powell's Thin Man films.

Edward McWade
as Minister on Film

Critic Reviews for The Ex-Mrs. Bradford

Add this to the long chain of Thin Man successors. Now it's Jean Arthur's turn to be the nosey wife to William Powell's amateur detective...

You get the feeling that the plot of The Ex-Mrs. Bradford was obtained by mixing half a dozen other plots in a hat. It's exciting and lively, however, and the best plan is to enjoy it while it lasts and not try to figure it out later.

It was mildly amusing, but it's not the kind of film you want to bet on as a winner.

Audience Reviews for The Ex-Mrs. Bradford

It's hard to be impartial, when one is crazy for William Powell. I will give it my best attempt though. This movie is very similar to The Thin Man series, complete with the gathering of suspects at the end. Although Arthur does well with Powell, it certainly lacks the chemistry and comedic timing he shares with Loy. Fun and definitely worth watching,