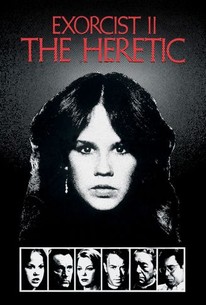 Four years after her bout of demonic possession, Regan MacNeil seems at peace as she enjoys a privileged but lonely adolescence. Her actress mother, absent on-location, leaves her in the care of her childhood nanny, Sharon, who feels inextricably bound to her young charge despite the terror she endured during the girl's possession. Regan attends frequent counseling sessions with Dr. Gene Tuskin, an unorthodox psychologist who believes Regan remembers more of her ordeal than she admits. Meanwhile, Father Lamont, a protégé of the priest who died exorcising Regan, is called to investigate the death of his mentor. The Church is divided over the teachings of Father Merrin and wants to gather documentation of his views about demonic existence. Father Lamont himself is conflicted -- haunted by images of a possessed woman he could not save. As he and Dr. Tuskin become convinced that the demon still exhibits a hold on Regan, the priest sojourns to Africa in search of Kokuma, who as a boy was possessed by the same demon and exorcised by Father Merrin. Learning the true name and ancient origins of his supernatural foe, Lamont returns to America to stage a climactic battle for Regan's soul.

Paul Henreid
as The Cardinal

A rather costly load of old nonsense, distinguished mainly by fine colour photography.

The theme is attacked with engaging intensity, and Boorman brings off more than one visual coup (notably the ingenious locust photography in the African sequences). Dennis Wheatley fans, at least, will love it.

Here we are spared many of Friedkin's cheap shocks -- the mutilations, the vomiting, the bestiality. But what remains is twaddle.

There had to be a sequel, but did it have to be this desperate concoction, the main thrust of which is that original exorcism wasn't all it was cracked up to be?

Burton, noble enough, had his clerical tongue in his cheek, while Linda Blair was by turn fresh and appealing then sly and sinister.

Exorcist number one was nasty twaddle. The Heretic, to give it a slightly different definition, is nasty drivel. With it, the Hollywood superstition bonanza surely reaches rock bottom.

The dialogue invites hoots of derision and audience catcalls, and director John Boorman strives to be intellectually scary and only succeeds in turning a former shocker into a current piece of shlock.

From the start the film is either unbearably silly or incomprehensible, and finally both at once.

Evil spirits are at work in Exorcist II. They've produced a film both exploitive and amateurish.

Beneath the gloss of color and bluster, this movie offers absurd action based on a stupid premise. But those who waste time and money on it can always say "the Devil made me do it."

The dialogue is the worst within memory, so ridiculous that it invites explosions of laughter at its most serious and high-flown moments.

Exorcist II: The Heretic is not just a sequel, it's a travesty. The new Warner Bros. release should be repossessed for nonpayment of thrills.

Can any priest actually be solid and resolute in their faith or must there always been an internal turmoil over God? The first signpost of malaise and ineptitude in the pitiful 'Exorcist II: The Heretic' is the superimposition of a possessed South American girl in flames and it is unintentionally laughable. Then the drivel shifts to Regan (Linda Blair) who has blossomed into a buxom ingénue off- Broadway and it's queasy to view Blair in the sexy prima donna context. Denials from the Catholic Church are commonplace nowadays so the fact that the Cardinal reevaluates his position on Satan as a corporeal entity is fathomable. The sleepy tone extends to the clash between modern hypnotherapy and devout piety. The "synchronizer" sequence is an incomprehensible jumble of nonsensical rhetoric, hammy, trance-like reaction shots from Richard Burton and Louise Fletcher and an excruciating recreation of Merrin's battle with Pazuzu. A biblical swarm of locusts in Africa and Regan's psychic abilities suborn more narrative incongruity than unnerving terror. Retconning Regan with an ESP slant is arbitrary and monumentally doltish (ex. Her conversation with Sandra, a stuttering autistic patient, is the height of hilarity). A Jesuit priest plummeting from a Cliffside is such flagrant wirework that he seems to be sailing on a hang glider. Most of the dawdling scenes of Burton's investigation in Africa are transparently filmed against a matte painting. Perhaps though, James Earl Jones in a locust costume is the official jumping-the-shark moment. This is the worst second chapter of a horror blockbuster outside of 'Blair Witch 2: Book of Shadows'. Even on its own wobbly structure (along with an Atari-esque midi theme), 'Exorcist II' is a toothlessly unmitigated fiasco that desecrates the memory of the Academy Award-nominated original.

What's wrong with this movie? (spoilers to follow) 1) Nurse Ratched's fantastic new psychiatric device are two strobe lights. 2) Linda Blair fondles Louis Flecther's breast. 3) Richard Burton appears to be looking for the bar. 4) The fact that the church sends Merrin to exorcise Regan in the first film, but he is suddenly a heretic in this one. 5) Wasn't there a Father Karras in the first one somewhere? 6) Apparently Regan's mom is more concerned with her career and dumps off her daughter on the first shrink with strobe lights she could find. 7) Balconies with partial rails for falling and fake falling. 8) Locust documentary footage. 9) The fact that the only plot point that actually made sense was Regan's tap dance recital. 10) Gratuitous Ned Beatty cameo. 11) Richard Burton's shirt during the last twenty minutes. 12) James Earl Jones spitting cherry tomatoes at Richard Burton. 13) The fact that ENNIO MORRICONE scored this piece of shit. 14) The fact that not only does a taxi cab crash through a wrought iron and brick fence, a woman catches on fire, and a portion of the house implodes no one in the entire block comes out to see what the hell is going on even though there are numerous lights on throughout the neighborhood until... 15) Richard Burton and Regan leave, stumbling in the wreckage of the house, then suddenly three thousand people show up asking Louis Flecther if she's OK while there's a charred corpse on the front stoop of the neighbor's house. 16) A stainless steel bird house.

Awful follow-up to The Exorcist. The film lacks anything that would make this a worthwhile follow-up to one of the greatest classics in horror history. However due to a poor plot, and very poor directing, this sequel doesn't do the original justice whatsoever. What we have here in this sequel is a poor attempt at trying to outdo the original. Unfortunately for this film nothing works. The scares are bland and the acting is boring, uninspired and overall not effective. Considering the cast involved, you'd expect this film to be at least watchable. However due to a bad script, sloppy acting and directing, this is one pointless sequel, one that doesn't deliver the jolts you'd expect. As a fan of The Exorcist, I was very much disappointed with film, and felt it was horrible. Only Exorcist: The Beginning was worst than this. This is a poor horror that I can't recommend to any fans of the genre. As a matter of fact this is one of the worst sequels in a horror franchise and there's absolutely nothing to enjoy about this film. If you've loved The Exorcist, you should pass up on this one, there's nothing to enjoy and the scares are almost nonexistent. They could have done something good here, but the film feels rushed, and unfocused throughout. The Heretic is honestly one of the worst horror sequel in the genre, and if you watch it, you'll understand why.

Quite like Incubus, The Exorcist II is a huge disaster that falls quite short of any humorous camp value, but quite unlike it, it still holds its own morbid fascination mainly through its relation to the first film and the cultural context that surrounds it. It's also notable because it's such an enormous drop-off in quality from the first film; John Boorman was famously vocal about his dislike for the meanness of the original Exorcist, and what does he do to counter it? This. No one is giving any sort of effort here. Where William Friedkin's meticulous directing was obvious, in the excellent performances he elicited and his water-tight visuals, Boorman condemns himself to visible incompetence by producing the results that are directly the opposite. Linda Blair is just flat out awful. As a beacon of universal goodness, she's an absolute joke. Meant to radiate peace and positivity, the most she can muster is a nauseating chipmunk-like cuteness. She's like Amanda Bynes' mother. Louise Fletcher is just about the most boring character you can possibly imagine, Richard Burton is not too far behind her, Kitty Winn was obviously stitched into the plot to try and repair the damage Ellen Burstyn's departure caused (and to ridiculous effect! Her role in the ending is almost too awful to be believed), and James Earl Jones...well. A job's a job, I suppose. Worse yet are some of the tableaux they're thrust into. The nadir of it comes fairly early on, in a truly ridiculous battle waged through time and space by Good Regan and Demon Regan over Louise Fletcher's breast as intermediated by two strobe lights. If it sounds like I'm overexaggerating the ludicrousness of the situation, I'm really not. Regardless of the cast's varying levels of proficiency, it's clear that none of them were comfortable maneuvering through the senseless plot. I could call it a melange of inchoate ideas about New Wave philosophy and the exchange of power between the Christian church and Christian individuals, but that would be far too generous. All this sounds good in theory, and a little background reading suggests that Boorman actually had some pretty interesting ideas in crafting a plot centered around the "world-mind" philosophy. In actuation, it falls apart, hamstrung from all sides - by its attempts to link back to the first film, which had nothing to do with this philosophy; by a group of actors who don't seem to have any understanding of how to tonally support their material; and by just plain poor screenwriting, where all of this fancy theological talk ultimately amounts to Regan swinging her arm in the air to chase away locusts. Really, a vast majority of people had a problem with The Exorcist II because it just isn't a horror film. It's a fair complaint, to be sure, but it doesn't necessarily impact the quality of the finished product. The product itself handles that more than capably. If you view the first movie and this as a clash between ugliness and light, as Boorman so delusionally viewed it, then this comes out the clear loser. A curiously awful movie, but also a fascinating one, on many different levels.