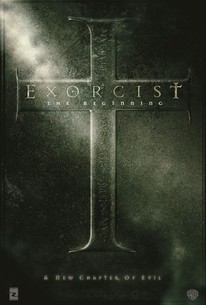 Critics Consensus: A mediocre, gory horror film, nowhere near the quality of the 1973 original.

Critics Consensus: A mediocre, gory horror film, nowhere near the quality of the 1973 original.

Critic Consensus: A mediocre, gory horror film, nowhere near the quality of the 1973 original.

The first prequel in the series, Exorcist: The Beginning is based upon events featured as flashbacks in 1977's Exorcist II: The Heretic. Playing the character made famous by Max von Sydow in the earlier films, this entry finds Stellan Skarsgård as a young Father Merrin facing true evil for the first time while doing missionary work in Africa in the wake of World War II. When a young local boy begins to behave strangely, it becomes more and more apparent to Merrin that the child is a victim of demonic possession. Together with Father William Francis, a fellow cleric played by Gabriel Mann (Josie and the Pussycats, The Bourne Identity), Merrin must square off against the demon, Pazuzu, for the first of many times. Boasting a first-time screenplay by best-selling novelist Caleb Carr (The Alienist), Exorcist: The Beginning features a supporting cast headed by Clara Bellar (The Sleepy Time Gal, A.I.: Artificial Intelligence) and European pop star Billy Crawford in his first big-screen acting role. Planned for years, but plagued by problems such as the death of director John Frankenheimer (before production had even begun) and the exit of star Liam Neeson, the fourth installment of the Exorcist saga finally got off the ground with Paul Schrader (Affliction, Auto Focus) behind the camera and Skarsgård filling the shoes left empty by Neeson. But the pitfalls didn't stop there, as Warner Bros. was disappointed with the approach taken by Schrader after seeing his finished cut, and hired an uncredited Renny Harlin to helm six weeks of reshoots.

James Paparella
as Boy in Market

Michel Leroy
as Tribesman in Hospital

John Sesay
as Turkana Warrior No. 1

Sayoh Lahai
as Turkana Warrior No. 2

Alessandro Casula
as Preacher with Pazuzu

News & Interviews for Exorcist: The Beginning

View All Exorcist: The Beginning News

Critic Reviews for Exorcist: The Beginning

The sfx in the climactic duel with the Devil is cheesy to say the least and the Devil's makeup render him more laughable than scary. On the face of it, the dice is loaded heavily against the movie.

The serious Catholic themes that made the original film genuinely disturbing have been flattened out into a cartoonish backstory pitting Merrin against Nazi storm troopers.

Reams of tedious exposition finally give way to a random jumble of horror movie clichés, rising to a shrill pitch of hysteria that is never remotely frightening.

It isn't quite hell, but clambering to the end of this dusty remnant of an idea is certainly purgatory.

Harlin's hamfisted horror-show offers an hour and a half of tooth-grinding boredom followed by 20 minutes of all-singing, all-dancing, knees-up stupidity.

Leaving aside the folly of making a prequel to William Friedkin's 1973 horror classic, this fails on every level. Ninety minutes of tedious exposition give way to a random jumble of horror clichés that rise to a shrill pitch of hysteria.

Unlike the first film, in which audience members fainted and threw up, the showdown between good and evil prompted more laughter amongst the audience than terror.

An utter violation of anything that ever made The Exorcist memorable... just gaudy effects and things jumping out to say "boo!"

Brutal. Not for kids.

More than 30 years after the original hit screens, along comes the very best of the sequels.

Audience Reviews for Exorcist: The Beginning

Considering that The Exorcist is one of the greatest horror films that has ever been made, Exorcist-The Beginning is a total disappointment. What surprises me is that the film boasts a good cast. However this film really doesn't cut it as a horror film. The film is supposed to be scary, considering it is a sequel to The Exorcist, which is quite possibly the scariest film ever made. The Beginning should tell the tale of how it all began, right? The film does that, but it never is scary, or brings fear to the audience. The film was fairly predictable, and lacked any effective plot development to build the tension up. Exorcist-The Beginning is a terrible prequel that really doesn't do anything exciting to develop the plot of the series. Hell, if you ask me, The Exorcist should've never had sequels pr a prequel. The film should have been a standalone film. Exorcist-The Beginning is a lazy, unimpressive prequel and it should never have been made. The film suffers from a terrible script and poor direction on behalf of Renny Harlin. The ideas might have been interesting to explore, however the film really doesn't try to deliver anything interesting or thrilling. This film is simply awful, and will disappoint fans of Friedkin's classic film. The film is bad, and has no redeeming aspects going for it. If you're a fan of the original, then skip on this one. You'll be glad you did. The film is pretty boring and won't hold your attention through the very end, I know I had va hard time to stay interested, and it took everything for me to stay focused on this piece of trash.

Oh my goodness! This was like Indiana Jones and the Pazuzu demon! Lots of horror and action sequences, a 1940's desert, Nazis, an underground temple, CGI dogs, evil artifacts, natives vs. the British Army, a huge Evil-Dead showdown at the end, Biblical references - it's all there. There are nice nods to the Exorcist series, though I wish they played the Tubular Bells music at key scenes.. It's a long movie, but more fun than the Dominion movie - a different Exorcist prequel. There weren't many scary scenes, but lots of creepy yuck stuff. They needed more witty dialoge between the priest and demon, and some dream sequences with flashing demon faces.

From the newest movies I liked this one a lot. Not too many people but I enjoyed. The story of Karras was something that worthed the movie.

08/08/2010 (TELEVISION) No scares here but there's a story here I was able to follow. It's actually the first time I have watched the whole thing from beginning to end, the first two times I didn't quite make it to the end, but that was back when it was first released. It takes a while before anything kindled any interest for me but when it started it was enough to make me stay for more. I only allowed myself to finish the film this time cause I'm trying to watch the complete saga and add my 2 cents on my reviews. Done.