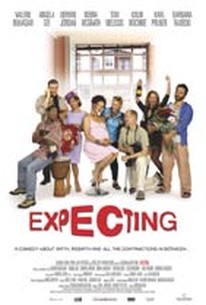 Expecting: a 24-hour "labour party" for eight diverse people gathering to witness and participate in a homebirth. Tensions run high as midnight cravings, stalled labour and expectations abound. Free-spirited Stephanie is a single, pregnant performance artist living in a downtown loft. Premature labour pains begin after a torrid sex-a-thon. Caught off guard, she phones her closest friends and family to rally them to her side. One by one the participants arrive to support her in their singular ways.Anita, Steph's domineering older sister, worries about Steph's freewheeling lifestyle and wants a hospital birth. Gary, a food photographer, Steph's friend and occasional lover, desperately plans his marriage proposal to her. Dani, an entertainment reporter and Steph's best friend, has agreed to act as Steph's labour coach but would rather focus on her next romantic conquest. Julia, Steph's midwife and Anita's estranged childhood friend, tries to maintain calm in the midst of chaos. Ian, Steph's current "New Age" lover, deeply wants to become a dad. Jack, Anita's perfect husband, wants to rekindle the spark in his failing marriage. Finally there's Azaan, Steph's creative collaborator and neighbour, who brings some spiritual harmony to the occasion.This ensemble is forced to come to terms with each other and to re-examine their own lives. Expecting is about birth, rebirth, and all the contractions in between. -- © Expecting Productions

Barbara Radecki
as Dani
View All

The moviegoing equivalent of going to a dinner party and being forced to watch the host and hostess's home video of their baby's birth.

The one not-so-small problem with Expecting is that the entire exercise has no real point.

...the Canadian equivalent of a Christopher Guest film.

It is very difficult to care about the character, and that is the central flaw of the film.

Reminds viewers of how beautiful and sexy a pregnant woman can be.

There are no featured reviews for Expecting at this time.