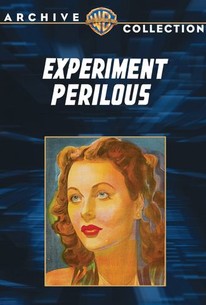 Officially based on a novel by Margaret Carpenter, Experiment Perilous would seem to be more inspired by MGM's psychological thriller Gaslight. Set at the turn of the century, the film stars Hedy Lamarr as Allida, the beautiful young wife of an elderly "gentleman" named Nick (Paul Lukas). Treating his wife like a possession, Nick keeps her a virtual prisoner in their London town house, cutting off all contact with the outside world. The situation is exacting a terrible emotional toll on Allida and her stepson Alec (George N. Neise). Enter kindly psychiatrist Huntington Bailey (George Brent), who takes it upon himself to free Allida and Alec from the despotic control of the insanely jealous Nick. The film's "money scene" is a frenzied gun battle in an aquarium, replete with shattered glass, gushing water and floundering fish; this sequence would be imitated ad nauseum in such future films as Lethal Weapon (1988) and Mission: Impossible (1996).

Janet Clark
as Deria as a Girl

Lawrence Wheat
as Caterer
View All

It captivates and proposes a very curious mix of drama, romance and suspense. [Full Review in Spanish]

I wish that the strongest passages of Experiment Perilous were more representative of the film's overall achievements. It's practically an essay in the boons and the perils of starting off wonderfully.

Splendid period thriller from Tourneur. Deserves to be better known.

Overheated but entertaining drama, Hedy of course is gorgeous.