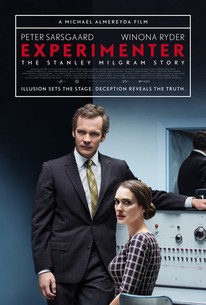 In 1961, social psychologist Stanley Milgram conducted the "obedience experiments" at Yale University. The experiments observed the responses of ordinary people asked to send harmful electrical shocks to a stranger. Despite pleadings from the person they were shocking, 65 percent of subjects obeyed commands from a lab-coated authority figure to deliver potentially fatal currents. With Adolf Eichmann's trial airing in living rooms across America, Milgram's Kafkaesque results hit a nerve, and he was accused of being a deceptive, manipulative monster. EXPERIMENTER invites us inside Milgram's whirring mind, beginning with his obedience research and wending a path to uncover how inner obsessions and the times in which he lived shaped a parade of human behavior inquiries. (C) Magnolia

Danny A. Abeckaser
as Braverman

Accalia Quintana
as Little Sister at the Airport

Kate Kitchin
as Big Sister at the Airport

Harold Takooshian
as Man in Suit

Nikki Cassen
as Brandt
View All

There are a few feints at considerations of human nature, and a word is spoken in defense of obedience, but the film serves better to start a conversation than to draw a conclusion.

Fascinating work by Michael Almereyda, a mix of audacious artifice, ruminations and reality.

When you have such a provocative foundation and such rich material to work with, pushing it to the next level isn't necessarily the best choice.

"Experimenter's" most striking quality is the way it encourages us to think deeply, from the first frame to the last, even if it's just to consider what on Earth an elephant is doing on screen.

A noble attempt, but fails to put its finger on the unexplainable.

What writer/director Michael Almereyda manages to create with Experimenter is an interesting look at the way Milgram's experiments worked through the eyes of cinema.

A perfect blend of performance art, cinema and the science of psychology, the result is thought-provoking, profound, and beyond intelligently entertaining.

Almereyda's direction is nothing short of brilliant here in the way it channels the spirit of Milgram into its own conception.

Bland and monotonous, Experimenter is certainly a forgettable film.

It's a strange, unsettling, but almost playful experience watching Sarsgaard watch us. It's this mischievousness that makes the film, one of the more unique, oddly entertaining things you'll find at the cinema this fall.

The stylized direction is sometimes unnecessarily distracting (even though the breaking of the fourth wall does work) and in some occasions the narrative seems to digress, but still this is a compelling account of a fascinating experiment that says a lot about human nature.

Would make a great double feature with The Stanford Prison Experiment movie. As I explained in my review for that film as background, I had a semester internship at the Center for the History of American Psychology, an archives/museum on the University of Akron campus, when I was getting my library degree. They had one of the "shock boxes" on display there and I found myself most interested in the social psychology field. Writer/director Almereyda has put some unique touches on this film. There are several well known actors in minor rolls. Peter Sarsgaard is professor Milgram and Winona Ryder is his faithful wife Sasha. Milgram's most famous "obedience experiments" took place in 1961, ten years before the Stanford Prison Experiments. This movie explores those experiments from all sides, but goes beyond them to reveal more about the rest of Stanley Milgram's life. Professor Milgram often breaks the fourth wall to explain the outcome of some situation directly to the audience so that the next scene can move forward more quickly. We are introduced to a few other experiments that Milgram initiated and to Sasha and Stanley's long relationship as equals. There is also a segment where professor Milgram and Sasha visit another professor who had been an inspiration to Stanley in his younger days. The filmmakers use green screens and black-and-white photos of the interior and exterior of this other professor's home to set the scenes. Historians or archivists may find this effect especially fascinating. I have not seen any other filmmaker mix live action and archival materials quite like this before. If you watch this movie, you will be entertained, perhaps disturbed, but you will definitely learn something.

I really enjoyed this casual (very nearly offhand) look at how group think affects all of our lives. An important consideration packaged in a coffeehouse format for ease of consumption.

THIS IS NOT A TEST - My Review of EXPERIMENTER (3 1/2 Stars) In the mid 80's, I had the chance to work on writer/director Michael Almereyda's first feature, TWISTER, and no, not the big disaster movie, but a quiet, cerebral, somewhat pretentious family psychodrama with a crazily disparate cast of actors including Dylan McDermott, Crispin Glover, Harry Dean Stanton, Suzy Amis and Tim Robbins. It established Almereyda as a quirky, experimental stylist, which time and time again he has brought to the table throughout his career with such films as HAMLET, NADJA and CYMBELINE. With EXPERIMENTER, he raises the stakes considerably with his beautiful, Brechtian, and wryly funny take on the famous Milgram Experiments of 1961. The film stars Peter Saarsgard as Stanley Milgram, who asked his study subjects to administer electric shocks to other participants if they answered questions incorrectly. What the subjects didn't know is that the shocks were fake and their counterpart was an employee of the study. From these data, Milgram learned how far people will go to obey authority. This topic was explored in COMPLIANCE (2012), which echoed Milgram's experiment, but here we return to the source. Along with THE STANFORD PRISON EXPERIMENT, another terrific film this year exploring the ethics of clinical trials, EXPERIMENTER is an apt title. Not content to tell a straightforward story, Almereyda has Saarsgard and other cast members frequently break the fourth wall. He utilizes green screen sets, smooth camera movement, and surreal flourishes to underline the artifice inherent in Milgram's life's work. It's a gamble that could have gone terribly wrong, but Almereyda, for perhaps the first time in his career, uses a light touch and good humor to make EXPERIMENTER an entertainingly original experience. It's also a pleasure to see Winona Ryder, as Milgram's smart, curious wife, back on screen. No longer a precocious teen, Ryder has blossomed into a secure, self-possessed actor whose haunted looks match perfectly with Saarsgard's wistfulness to underscore the film's themes of clinical observation and sadness over humanity's lemming-like attributes. Milgram dedicated his life to observing human behavior, and it's refreshing to see so many examples of it in the film. Jim Gaffigan, as the poor guy who pretends to be shocked, deftly fills the role of comic relief, delivering an understated performance reminiscent of a more controlled Chris Farley. Cinematographer Ryan Samul provides apt MAD MEN-style framing and simplicity while luring us in with the staged artifice of it all. This is quiet, cerebral filmmaking and may not be everybody's cup of tea, but it made me respect Milgram more after years of looking at him as a scientific joke, and in this day and age, that's kind of shocking.