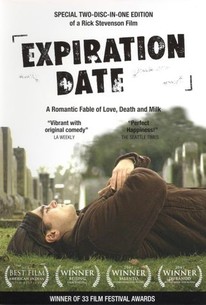 Death lurks in the form of dairy delivery in this independent black comedy. Charlie Silvercloud III (Robert A. Guthrie) is a young man of Native American ancestry who has the sneaking suspicion a certain family tradition will soon catch up with him. It seems Charlie's father and grandfather both died on their 25th birthdays, and both died from the same circumstances, after being struck by runaway milk trucks. Charlie's 25th birthday is only a few weeks away, and he's starting to feel his certain fate is lurking around the corner. Charlie's mother, Lucille (Dee Wallace Stone), has been tracing the routes of the local milk delivery men and discover they all converge in their neighborhood, so Charlie starts putting his affairs in order -- picking out a cemetery plot, planning his funeral, and ending his relationship with his girlfriend. However, with his birthday not long away, Charlie meets Bessie Anderson (Sascha Knopf), an eccentric but beautiful girl who isn't about to let him die. Expiration Date also stars David Keith, Richard Sanders, and Ned Romero.

Robert A. Guthrie
as Charlie

Brandon Whitehead
as Arnold
View All

Too stringy and disjointed for its sporadic charms to amount to much.

It's almost funny whenever a Smith Brothers milk truck is mowing Charlie down, but it's almost never funny when he's wooing the most annoying girl in the world.

The film loses its way in a long, slapsticky climax.

A screenplay as vibrant with original comedy as it is with local color.

There are no featured audience reviews yet. Click the link below to see what others say about Expiration Date!