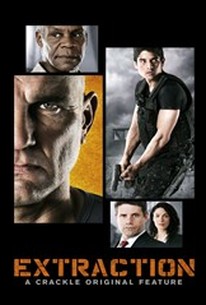 Danny Glover, Sean Astin, and Vinnie Jones headline this independent martial arts action thriller following a U.S. Black ops agent named Mercy on his mission to extract a criminal from a maximum security Chechen prison. When the mission goes awry, Mercy and his target must fight their way out of a prison filled with violent convicts, and prevent a major arms dealer from carrying out a deadly attack on innocent civilians. Joanne Kelly, Falk Hentshel, and Jon Foo co-star.

Jon Foo
as Mercy
View All

There are no critic reviews yet for Extraction. Keep checking Rotten Tomatoes for updates!

There are no featured audience reviews yet. Click the link below to see what others say about Extraction!