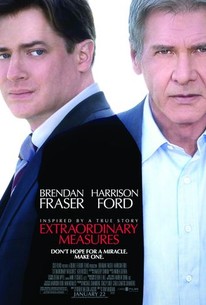 Critics Consensus: Despite a timely topic and a pair of heavyweight leads, Extraordinary Measures never feels like much more than a made-for-TV tearjerker.

Critics Consensus: Despite a timely topic and a pair of heavyweight leads, Extraordinary Measures never feels like much more than a made-for-TV tearjerker.

Critic Consensus: Despite a timely topic and a pair of heavyweight leads, Extraordinary Measures never feels like much more than a made-for-TV tearjerker.

Supported by his beautiful wife Aileen and their three children, John is on the fast track. But just as his career is taking off, Crowley walks away from it all when his two youngest children, Megan and Patrick, are diagnosed with a fatal disease. Crowley teams up with scientist, Dr. Robert Stonehill. Together they form a bio-tech company focused on developing a life-saving drug. One driven to prove himself and his theories, the other by a chance to save his children, this unlikely alliance eventually develops into mutual respect as they battle the medical and business establishments in a fight against the system -- and time. But, when it appears that a solution has been found, the relationship between the two men faces a final test.

Courtney B. Vance
as Marcus Temple

Harrison Ford still retains enough of his old movie star magic to ramp up the electricity a bit when he's onscreen, but this only makes you want to see him do something that makes better use of his gifts. Brendan Fraser just seems to grow bigger over the

Soapy and unemotional, this makes a hash of an interesting true story.

Moderately illuminating in parts, but the clichÃ (C)s of cinematic suffering tend to overwhelm it.

Harrison Ford is the clichÃ (C) of a scientist who cares more for equations than humans, and works to atrocious rock music. The child actors are cloying in their cuteness. A serious subject drowned by sentimentality.

Vaughan and scriptwriter Robert Nelson Jacobs have plumped for the â~one man against all oddsâ(TM) plotline, the most reassuringly inoffensive of narrative archetypes.

Harrison Ford is enjoyable in just about everything, but somehow he plays an unlikeable character in this film.

EXTRAORDINARY MEASURES is an extraordinary story about some extraordinary people. An intelligent film that shoots an IV of humanity straight into your heart.

Harrison likes to talk about how he's a team player and how everything he does is in the service of the story. His talk-show mantra is that, even though he's a star, he doesn't act like one. Maybe that was once the case. But not here.

Geography aside, Extraordinary Measures includes some memorable moments but doesn't live up to the stirring real-life story that inspired it.

Extraordinary Measures is a celery of a film; humorless, flavorless, mediocre through and through.

Its an okay movie. Ford and Fraser are good strong leads with a good supporting cast. The storyline is okay and although based on a true story i dont think its really a best movie maker, should just of stayed for tv movie. its a nice enough heart warming, if not inspiring movie of one dads motivation to cure his kids,but this movie is only 'okay' and is okay enough to watch on a sunday afternoon.

Taking a break from trying to amuse the kids with forgettable family films, Brendan Fraser is trying to save the kids with tolerable family drama. The first feature made by CBS Films, Extraordinary Measures is largely bereft of the mawkish excess of recent kids-with-cancer slog Matching Jack. Sick children and Crowley's (Fraser) selfless wife Aileen (Keri Russell) often disappear, leaving us with starstruck Fraser and Harrison Ford arguing, or fighting the power. Jared Harris is suitably terse as a cold-hearted pharmaceutical "suit", yet professionally crabby Ford ensures that those on the front line of medicine aren't whitewashed as altruistic saints. This is terribly tense - or draining, even with Fraser's constant effort to prove he's a serious performer by bugging his eyes in a serious manner. But being unaffected by the prime objective is impossible.

Poor acting by Frasier and Ford, no real focus on the disease that the kids suffer from and many pointless scenes that seem to just extend the movie and do nothing else.

Can't help but feel like a big budgeted tv film, but that's alright, because it is a damn good one. Never has such a basic story grabbed my attention and make me feel for every character in a film before. It is far too basic to call a great film, but for what it is, it is brilliant. It is perfectly casted and the story is well paced. Extraordinary Measures, had me smiling, frustrated, sympathetic, and crying by the final moments of the film. It's a great story that is easy to think of, but it is portrayed to perfection. I am in love with this movie!