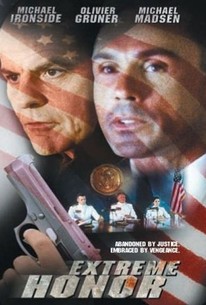 Navy SEAL Brascoe (Dan Andersen), is forced out of the service in disgrace after being framed by his partner Cody (Olivier Gruner) regarding a conflict gone wrong. Now a civilian without direction, Brascoe learns that his bad luck hasn't run out yet: His young son is dying from cancer and Brascoe needs $5 million to finance a radical new treatment that may save his life. Brascoe asks an arrogant billionaire, Baker (Michael Ironside), for a donation, but is stiff-armed by burly body guards. Desperate for the money, Brascoe rounds up a gang of crack thieves -- including Sparks (Michael Madsen) and Brady (Grand L. Bush) -- to steal the cash from Baker. The heist completed, Brascoe's men are slaughtered one at a time -- but it's not by a vengeful Baker.

There are no critic reviews yet for Extreme Honor. Keep checking Rotten Tomatoes for updates!

There are no featured reviews for Extreme Honor at this time.