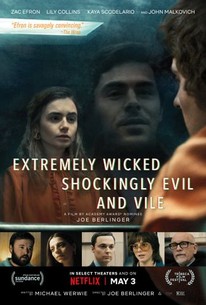 Elizabeth Kloepfer refused for years to acknowledge that her boyfriend was a serial killer. Her partner, Ted Bundy, became famous in the 1980s for committing several heinous crimes against women, despite her disbelief, who watched passively as the murders were unleashed from a very unique perspective.

Everything before [Bundy's arrest] is chronicled in this movie and it's fascinating.

Efron not only bears a striking resemblance to Bundy... but deftly captures the off-kilter nature of his demeanor... That doesn't elevate the material, necessarily, as much as it does add to the queasiness watching it.

In a way, it skims the surface too much, but I do think Zac Efron's central performance is well-done...the circus of the courtroom is also well-captured.

Efron has a ball: he's likeable, goofy and manic, except when flashing his eyes when he looks like that boy from The Village of the Damned.

One of the more palatable serial killer pictures of recent years...

Extremely Wicked certainly doesn't glamourise [Ted] Bundy, but it does somewhat sanitise him.

Efron makes for a disarming and terrifying Ted Bundy, but the film doesn't seem to know whose point of view it wants to take.

I thought that Zac Efron did great and although it's not a perfect movie by any means I think it did a really good job at shedding a light on a story that's very complicated.

Extremely Wicked does not showcase the misogynistic fury carefully hidden underneath Bundy's suave law student facade. It instead reduces its focus to his life just before his capture, his prison escapes and the highly theatrical murder trials.

If it wasn't for Zac Efron embodying every inch of Ted Bundy's charismatic persona with a stunningly mesmerizing performance we'd be left with a forgettable affair.

It isn't able to add anything new to the countless films, documentaries, TV shows and books that have already covered much of the same ground, with many doing so far more successfully.

Why did people -- or, more specifically, women -- buy his nonsense? Even after Extremely Wicked, Shockingly Evil and Vile, we still don't know.

True stories that revolve around a character who commits the worst kind of crimes isn't exactly something that people look forward to watching, but when the story itself is just so crazy that it makes for an engaging film, I think it warrants a production. Although one of Netflix's latest films in Extremely Wicked, Shockingly Evil, and Vile won't be getting a glowing recommendation from me by any means, this is a film made for the average viewer who would like to know there story, without being overwhelmingly disgusted. Here's why I believe certain viewers should be checking this film out. Following Ted Bundy (Zac Efron) as he plays it cool, marries the love of his life, and had a child, the film begins to reveal what he may have been doing behind the scenes. Being accused of countless murders of women in numerous states outside of his own, this is a story that has a lot more grime under its surface than most movies do. Where I feel this film falls short; However, is within the overall presentation of the movie itself. Being a narrative feature, it almost still feels like a documentary at times, and that's not really a positive. This is a film that focusses on a disgusting man, who comes off as one of the nicest people in the world, and the movie chooses to stick with that from beginning to end. Aside from a few images that insinuate certain things, Extremely Wicked, Shockingly Evil, and Vile is a tame movie in terms of what it could have presented to the audience. Just like news articles and documentaries about this man, this movie only tells you what he has done, rather than showing any of it. While I wasn't looking to watch a film that explicitly showed what he did, the story didn't have much of an emotional impact, because it was told from his perspective, without revealing anything he has done (for the most part). Aside from the overall choice to hide the events themselves, this is a film that showcases one of the best performances of Zac Efron's career. If for nothing else, I would recommend this movie for that alone. The way he plays it cool and finds comedy in terrible moments was very fitting for the title of the film. His performance sucked me in, even though I didn't find the film to be great overall. In the end, Extremely Wicked, Shockingly Evil, and Vile is a film that's light on substance, but very solid in many other regards. From the performances to even the screenplay itself, it's a film that's trying to please the sensitive viewers who still wish to experience this story, which I can appreciate in a way. Where I found myself most impressed was in the direction. Having only directed the absolutely dreadful feature film in Book of Shadows: Blair Witch 2, I was pleased to see the growth of director Joe Berlinger. This film made me look forward to his future feature film endeavours. Overall, this film didn't do much for me, but the story itself and the central performance have me giving it a passing grade.