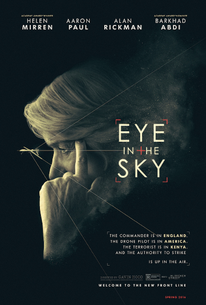 Critics Consensus: As taut as it is timely, Eye in the Sky offers a powerfully acted -- and unusually cerebral -- spin on the modern wartime political thriller.

Critics Consensus: As taut as it is timely, Eye in the Sky offers a powerfully acted -- and unusually cerebral -- spin on the modern wartime political thriller.

Critic Consensus: As taut as it is timely, Eye in the Sky offers a powerfully acted -- and unusually cerebral -- spin on the modern wartime political thriller.

Eye In The Sky Videos

Eye In The Sky Photos

Hossain Dahir
as Driver One

News & Interviews for Eye In The Sky

View All Eye In The Sky News

Critic Reviews for Eye In The Sky

Director Gavin Hood works the tension and the moral uncertainty to good effect but at times the film feels schematic and too much like revision.

Hood and Hibbert's procedural is a crackerjack affair in all the ways that count, and it's safe to say it looks at this hot button issue in a way certain to get audiences talking afterward.

It's a lean, Lumet-like thriller that puts the moral calculus of drone warfare in its crosshairs.

Director Gavin Hood has achieved something few could -- he made what is essentially 100 minutes of people standing in rooms and staring at screens incredibly compelling. It's a master class in suspense.

It's a tense thriller about a single action, taking place in Nairobi, commanded from London, albeit piloted from Las Vegas - and its presentation of the moral dilemma about whether to strike or not is complex and wrenching.

Combining tense action with an exploration of the psychological demands, and impact, of modern drone warfare, Eye in the Sky also demonstrates that strong female characters can command the genre as resoundingly as their male counterparts.

To their enormous credit, director Gavin Hood and writer Guy Hibbert offer no easy answers and take no easy outs, electing instead to keep viewers as conflicted and uncomfortable as the characters on the screen.

Ethical dilemmas abound in "Eye in the Sky" and the filmmakers respect the audience enough that they don't preach an easy conclusion.

It's a riveting thriller in which nobody's hands get dirty, but everyone's are covered in blood.

The filmmakers end up adopting the viewpoint of the powers that be, the US and UK political establishment, the principal source of global terrorism.

Wordy and pedantic, it asks the viewer to choose sides and then explore the reasoning behind their decisions.

Audience Reviews for Eye In The Sky

A tension thrill ride that leaves you in awe of the talent on screen and off. Saddening that this is Alan Rickmans final project but a worthy one.

A tense build up of emotions, carefully considered in its exposure of diametrically opposed concerns over militar, political and moral action in the current technological war against fundamentalism.

Gripping and intelligent, Eye in the Sky is edge of your seat cinema that also sheds light on a difficult and complex subject. What the film lacks in technical craft (due to mediocre special effects) is outweighed by its excellent writing and excellent acting, especially from Alan Rickman.

The legalities of drone warfare is a highlight of this thoughtful discussion. What are the ethical ramifications? The ability for governments to execute people from the safe comfort of a remote location in a different country is addressed. Also the collateral damage, specifically the possible loss of innocent human life, is taken into account. Director Gavin Hood takes a long time to set up the plot, but once the story catches spark, it's pretty tense. He's so much more engaging when directing these smaller films (Oscar-winning Tsotsi) than the big budget Hollywood blockbusters (X-Men Origins: Wolverine, Ender's Game). The intricate consideration of numerous "what-ifs" form the crux of the drama. The moral dilemmas make Eye In The Sky essential viewing. fastfilmreviews.com

Eye In The Sky Quotes