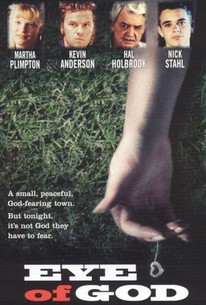 Tim Blake Nelson wrote and directed this adaptation of his own stage play: The police chief (Hal Holbrook) of Kingfisher, Oklahoma, attempts to find out what happened to 15-year-old Tommy Spencer (Nick Stahl), found in a traumatic state after witnessing the suicide of his mother. Flashbacks trace the courtship and marriage of glass-eyed Ainsley Dupree (Martha Plimpton) and her ex-con husband, Jack Stillings (Kevin Anderson). The multiple storylines and timelines eventually intersect. Filmed in Oklahoma (Collinsville, Skiatook). Shown at the 1997 Philadelphia Festival of World Cinema.

Toby Metcalf
as Officer No. 1

Darryl Cox
as Officer No. 2

Critic Reviews for Eye of God

Anderson creates what may be the most vividly scary and authentic portrait of a sociopathic ex-con since Dustin Hoffman in Straight Time.

Set against the vivid backdrop of an Oklahoma oil town in the terminal stages of economic devastation, "Eye of God" is deliberately paced but almost entirely free of nonessential material.

Moody, sympathetic and shot through with a sense of apprehension, "Eye of God" marks an impressive debut for writer-director Tim Blake Nelson.

A strange, dark movie that ruminates upon several weighty questions about faith and the existence of a Supreme Being ...

A film in which dreams seem to yearn toward a place where they can grow.

Despite the fact that the film's whole never quite equals its parts, Eye of God provides a fascinating ride and evocative glimpses of ordinary people in the throes of crisis.

The story doesn't quite add up to a well-told drama, but there's rock-solid acting by Martha Plimpton, Kevin Anderson, Hal Holbrook as the local sheriff, and Nick Stahl.

...an overly complex narrative puzzle placed amid an atmospheric setting with distracting voice-over narration by Holbrook's town sheriff as he reflects on a tragedy that makes mute a local orphan...

Tim Blake Nelson shows promise and has captured the essense of a small rural town, but his point isn't defined clearly enough.

It's a shame that this strong cast had such weak material to play.

Unfolds with a flashback/flashforward razz-ma-tazz that doesn't quite disguise its predictability.

Audience Reviews for Eye of God

There are no featured audience reviews yet. Click the link below to see what others say about Eye of God!