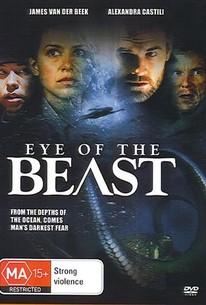 Eye of the Beast Photos

Fear rises from the depths when a government scientist travels to a remote fishing village in order to investigate rumors of a massive underwater beast with a frightful taste for human flesh. Panic has spread through the fishing village where locals have lived off of the sea's bounty for centuries, and as word of an aggressive leviathan reaches the powers that be, an investigator is dispatched in order to confirm or refute the frightening rumors. Government scientist Dan Leland (James Van Der Beek) is a man of logic, but he's about to cross paths with a creature that seems born straight out of his worst nightmares. In this instance at least, the rumors are well founded, and by the time Dan comes eye-to-eye with the source of all the panic it already be too late for him. ~ Jason Buchanan, Rovi

Critic Reviews for Eye of the Beast

Only for diehard kracken addicts.

...generally comes off as a surprisingly entertaining little monster movie that benefits substantially from some unexpectedly above-average performances.

Audience Reviews for Eye of the Beast

This movie is boring and predictable. It uses many horror-esquire clichés. There were absolutely no surprises, and so watching this movie was more boring than putting seeds into peat pods. However, to the credit of the movie makers, the acting was not as sub-par as usual in Sci-Fi Channel movies. It was certainly not outstanding, but it did not have the element of cheese. Overall, Eye of the Beast was decent movie.

Eye of the Beast Quotes