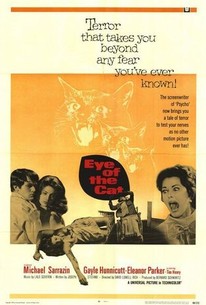 Eye of the Cat Photos

Aunt Danny (Eleanor Parker) is a wealthy widow with a passion for her many feline companions. When the hair stylist Kassia (Gayle Hunnicut) sees Aunt Danny in near respiratory failure, she contacts her nephew Wylie (Michael Sarrazin) to tell him of her condition. Wylie's brother Luke (Tim Henry) is the one who takes care of the ailing matron, although she detests him. Kassia discovers Aunt Danny wishes to change her will to include Wylie and her houseful of cats. Wylie is phobic of felines, and Aunt Danny asks Luke to get rid of the pets. After Kassia and Wylie enter the house, the cats are on the prowl in this suspenseful drama. Veteran character actor Laurence Naismith plays Dr. Mills in this implausible film.

Annabelle Garth
as Socialite
View All

Critic Reviews for Eye of the Cat

There are no critic reviews yet for Eye of the Cat. Keep checking Rotten Tomatoes for updates!

Audience Reviews for Eye of the Cat

There are no featured audience reviews yet. Click the link below to see what others say about Eye of the Cat!

Eye of the Cat Quotes