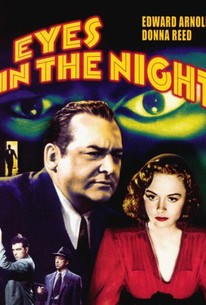 Eyes in the Night Photos

Edward Arnold made the first of his two screen appearances as Bayard Kendrick's blind detective Captain Duncan McLain in MGM's Eyes in the Night. The plot is set in motion by Norma Lawry (Ann Harding), whose stepdaughter Barbara (Donna Reed) has been keeping company with washed-up actor Paul Gerente (John Emery). Norma feels that Gerente, an ex-lover of hers, is a bad influence for Barbara, but the girl merely assumes that Norma wants Gerente all to herself. When the ageing actor is murdered, Barbara assumes that Norma committed the crime. Rather than go to the police, Norma heads to her old friend Duncan McLain, but when the detective arrives at the scene of the murder, the body has disappeared. Detecting the odor of violets in the room, McLain uses this tiny clue to build a case against a gang of Nazi spies, headed by the Lawry's butler Hansen (Stanley Ridges), with whom the late Mr. Gerente had been collaborating. Just knowing who did it isn't enough in this case, however: getting the drop on McLain and his associates, the villains hold the detective and Lawry prisoner until they are able to get their hands on a secret formula developed by Barbara's father (Reginald Denny). In true movie-serial fashion, it is McLain's faithful seeing-eye dog Friday (played by "himself") who saves the day. A "B" picture with "A" entertainment value, Eyes in the Night proved successful enough to warrant a sequel, 1945's The Hidden Eye.

Walter Tetley
as Boy
View All

Critic Reviews for Eyes in the Night

Credit the Messrs. Zinnemann and Chertok with another hectic little pulse-quickener.

A minor but jolly slice of ingenious sleuthery.

Reed, who would later become known for her portrayal of a sugary sweet TV mom, is convincing as the willful, precocious stepdaughter.

Audience Reviews for Eyes in the Night

There are no featured audience reviews yet. Click the link below to see what others say about Eyes in the Night!

Eyes in the Night Quotes