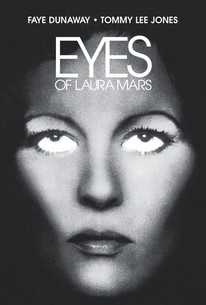 Critics Consensus: Eyes of Laura Mars hints at interesting possibilities, but they're frittered away by a predictable story that settles for superficial thrills.

Critics Consensus: Eyes of Laura Mars hints at interesting possibilities, but they're frittered away by a predictable story that settles for superficial thrills.

Critic Consensus: Eyes of Laura Mars hints at interesting possibilities, but they're frittered away by a predictable story that settles for superficial thrills.

Eyes of Laura Mars has an intriguing premise -- which, alas, is abandoned halfway through in favor of gratuitous violence. The title character, played by Faye Dunaway, is a high-priced fashion photographer, specializing in gory "murder" layouts. When Laura is plagued by visions of genuine murders, she at first dismisses this as a by-product of her kinky specialty. And then she begins telepathically witnessing the bloody killings of her friends and co-workers, as seen through the eyes of the actual killer. Anyone who can't guess who the murderer is within five minutes deserves to be drummed out of the theatre in disgrace. Tommy Lee Jones does what he can with an underdeveloped role, while Rene Auberjonois steals the film as a belligerently flamboyant homosexual. Watch for talk-show host Bill Boggs and future LA Law star Michael Tucker in minor roles.

Bill Boggs
as Himself

Michael Tucker (I)
as Bert

Tom Degidon
as Policeman
View All

Irvin Kerschner's stylish 1978 paranormal thriller has a premise ahead of its time.

... you find yourself chewing over "Laura Mars" after the lights come up. Unfortunately, it's the kind of chew that leaves your jaw feeling tired and your mouth tasting sour.

Especially well handled are the screen realizations of Dunaway's premonitions. They look like a blurred videotape, as she explains to Jones at one point, a conception which works well on screen.

A shallow, chic confusion of eyes, camera lenses, and saleable images of violence of the sort it now purports to question as an 'issue'.

In any case, high-minded artistic fluttering - the kind Diane Keaton attempts in "Interiors" - comes so naturally to Miss Dunaway that Tommy Lee Jones, as a down-to-earth, soothing cop, is not just a good foil but an indispensable one.

In the pantheon of great New York films, Eyes of Laura Mars is rarely mentioned ... but it stands the test of time as one of the very best.

This taut and glamorous American giallo is so quintessentially '70s that its very existence feels like a day well spent at the museum of sleek lines and cocaine excess.

The Eyes of Laura Mars is a movie for all as ages... to avoid.

This is effectively an American giallo, and fittingly so - the original spec script was by John Carpenter.

Kershner turns the film into an exercise of stylistic excess...

...the simple idea of inverting the male gaze and giving it to a woman feels pretty revolutionary in a horror film from the late 70s.

One of the great American giallos, Eyes of Laura Mars is an unsung little thriller masterpiece. Very little gore and violence is actually seen taking place, but the score makes it a hell of a lot more thrilling than violent content could. I can't believe I've gone all of these years without seeing this gem. I don't want to brag and say I knew who the killer was right from the beginning, but I kind of did. I just knew there was something very off-kilter about a certain character (those who have seen it will know who I mean). Very Argento-esque, it reminded me a lot of Opera and Suspiria. A truly underrated classic of the genre, to be sure.

So, I got to see this movie again yesterday. It's very interesting how Laura has psychic powers, yet doesn't know who the killer is till the end, but then the ending is cliche. Overall, it's pretty good, but it could be better.

A great film but I was sad at the end when Tommy Lee Jones (John Neville) was the killer. Worth a watch & a classic 70s film :)

The Eyes of Laura Mars begins with legitimate promise, itching at the surface of this New York art-or-trash aesthetic that sort of serves as an interesting mirror for the movie itself. It seems to have a few smart ideas about the scene it deals with, ideas that quickly fizzle out to give way to a disappointingly generic slasher. Perhaps the most exciting part of the film is how batshit hysterical Faye Dunaway is - she isn't necessarily bad, pulling some sympathy out of us and displaying some pretty exemplary dialogue timing, but she hits astronomically over-the-top heights during her chase scenes. She's just not meant to be a scream queen, not especially with her hilarious wounded-seal hollering. Eventually even my derision of the film grew unappealing as it made its way toward a predictable ending propped up on some really shitty psychodrama. Still, The Eyes of Laura Mars has some surprises up its sleeve, mostly in its first half hour, when it promises to say something insightful about art and death but mostly just ends up acknowledging that they both exist. The photo shoots themselves, often accompanied by music that must have been too cool in 1978, are entertainingly lurid (though not even remotely objectionable or violent as this movie's world seems to think they are). And that cast is fun; Rene Auberjonois is a special treat, camping it up something fierce as Dunaway's ambiguously gay agent, and Brad Dourif is befuddling as her hobo driver. Tommy Lee Jones is also hilarious as possibly the ugliest cop I've ever had a movie tell me was hot. Check that unibrow, dude. Not imperative viewing. Worth it if you're really running low on your late-70s thrillers, which I don't think you ever will be.