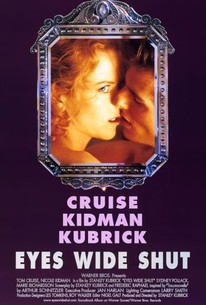 After learning of his wife's flirtatious behavior, Dr. William Harford goes on an odyssey of his own.

Cindy Dolenc
as Girl at Sharky's

Kubrick's final film is unique in his oeuvre for concluding on a note of apparent affirmation.

This is finally a film that is better at mood than substance, that has its strongest hold on you when it's making the least amount of sense.

It's empty of ideas, which is fine, but it's also empty of heat.

At least Fellini pulled out the stops from the first minute when he wanted to get surreal. Here, realism fades into surrealism, then into outright foolishness. Morbidly paced foolishness.

Cruise in particular lays himself open in that fiercely committed way that he tries everything as an actor.

It's as rich and strange and riveting as any journey he's taken us on, yet it's also familiar in a disquieting way.

Kubrick's last film has aged very well. Its depiction of honesty within a high class marriage and the consequences, is as valid as it is dangerous. [Full review in Spanish].

Eyes Wide Shut (1999) is legendary director Stanley Kubrick's highly-anticipated, last completed film. It was titled 'Eyes Wide Shut' to imply self-contradictory opposites: at first being exposed or tempted, and then reflexively turning away...

Eyes Wide Shut has gotten better with age. It was, in Nietzsche's word, untimely; its first audiences failed to understand it, while its real contemporaries had to bide their time.

This is not the steamy sexual extravaganza we have been promised, but it is provocative. In its own tormented way, Eyes Wide Shut is a valentine to monogamy.

For many, Stanley Kubrick is one of the greatest directors America has ever produced and has offered up some of the most thought provoking films throughout his career. Unfortunately, his last film didn't receive the credit that it deserved. Literally days after delivering the final film, Kubrick died. However, in some senses, I'm actually glad Kubrick didn't have to witness his swansong's much maligned backlash. A big factor in this was the poor marketing campaign. For the first time, Kubrick released a film in the internet-age where information was readily accessible on the secrecy of its production. Rumours abound, it was flaunted as a sexually explicit bonkfest with Cruise and Kidman and the trailers teasing the audience with the real-life, married couple's nudity certainly didn't help matters. In truth, what (little) you see in the trailer is essentially all there is in the entire film between the couple. Added to which, there were rumours that Cruise would be shooting heroine for the film and wearing a dress. Needless to say, those who flocked in their droves to see such controversy where left sorely disappointed. What they really missed, though, was a rich and provocative meditation on sexual desires and the human psyche. Plot: Happily married New York City doctor, Bill Harford (Tom Cruise) appears to have the perfect life with his wife Alice (Nicole Kidman). When she admits that she had a potent sexual fantasy about a man she never met and was tempted to cheat on him, he is left reeling from shock, and goes out into the Manhattan night where he meets strange characters and enters into a world of sexual adventure for the first time in his life. Within minutes of the film's opening, we are voyeurs in the lives of our main characters. We witness them at a party where Alice flirts with an older lothario who imparts his wisdom that women only got married in order to lose their virginity, freeing them to do as they pleaded with other men. Meanwhile Bill is being accosted and propositioned to an upstairs bedroom by two beautiful models, promising to show him "where the rainbow ends". Despite these encounters amounting to nothing, they set the tone for the rest of the film in how this seemingly contented married couple will have their fidelity questioned. It's moments like these that showcase Kubrick's command of space. I love his ability for crafting a place or scene that is vast yet strangely intimate. He gives a place importance and here it is no different. Despite being set in the vibrant sprawling nightlife of New York City, we seem enclosed in the lives of our two main characters. Kubrick's craftsmanship was just as evident in the The Shining whereby he conveys the loneliness and isolation of his characters and somehow manages a palpable sense of claustrophobia within grand open spaces. If for nothing else, it brings his actors to the forefront and enhances their performances. Speaking of which, Cruise and Kidman are very brave and dynamic here. Their real life marriage (at the time) effectively seems to permeate the characters - giving a very intimate portrayal of a strained, unfulfilled relationship. It should also be noted that with Kubrick's fastidious approach to filming that the psychological torment that he put his actors through led to the break-up of Cruise and Kidman not long after filming wrapped. Much was said about Kidman's performance but this is by-and-large Cruise's film. He's the anchor and it's among his strongest work as he absolutely smolders on screen as his Dr. Harford is always heavily weighted on and there's an escalating sense of danger in his experiences. Kubrick's last film is not just one to be viewed but one to be immersed in. That's the absolute beauty and captivating nature of the film. It draws you in and, much like the protagonist, you have no idea what you're in for but you're swept along with it as if in some hypnogogic state. As a self-proclaimed admirer of David Lynch, Kubrick has managed to make a film that the idiosyncratic Lynch would be proud of. In the latter stages it becomes quite an intriguing, surrealistic mystery that begins to question Harford's perception of events. Over the course of the evening, Harford experiences a prostitute, a proposition from a teenage girl, the suggestion of his sexual orientation and, of course, an en masse orgy. But, is this the world that he's been cloistered from experiencing a reawakening? Or are these manifestations of his sexual fantasies and desires? These are the questions that begin to surface as the film's dreamlike, ambiguous nature grows stronger. It's not just what's underneath Eyes Wide Shut that's impressive, though. On the surface, the film is also visually stunning. Kubrick shoots on a grand scale where production designers Leslie Tomkins and Roy Walker capture both the interiors and exteriors with lavish flamboyancy. There's also an abundance of colour on display and cinematographer Larry Smith deserves the utmost credit with his stunning contrast of warm and cold colours that adds to the foreboding atmosphere that's tangible within the themes of the film. An avant garde, near masterpiece from Kubrick. Consider, if you will, David Lynch directing Martin Scorsese's absurd, dark comedy After Hours and you'll get a little closer to understanding it. Premature judgement has harmed the film but it is still, admittedly, not for everyone. It's not the explicit orgy that people expected but a deeply surreal, and hypnotic, psychological exploration of sexual tension, paranoia and jealousy. But if viewed from a subconcious perspective it is a hugely rewarding experience. Sadly, it was Kubrick's last film but it's also one of his finest. Mark Walker

I should not have watched this with my mom

A slow-burning Kubrickian exploration of extramarital sexual desire and jealousy full of symbolism, and it throws us together with the characters in a nightmarish odyssey highlighted by a terrific game of colors using blue and red to suggest menace and unconscious sex impulses.

As far as final films go, is there really a better film that Kubrick could have his career end with (due to his death) than this? I don't really think so. This is, like basically every Kubrick film, a challenging, beautiful, and haunting work of art. A ridiculous amount of shots are framed quite literally like you'd see done to a painting in a musuem. This sucker just oozes with craft. It would be a surprise if it didn't, really. I lost track of the number of long takes and tracking there were, but I was also absorbed when I tried to imagine how difficult some of them were to set up and execute, especially given Kubrick's perfectionism. For people who think this movie is only about gratituous nudity and sex, you are wrong, will be disappointed if you watch it solely for that reason. This is a long film that is deliberately (read: slowly) paced, with all of the sex and nudity being done in a very tasteful and artistic manner that also serves as an integral part of the plot and themes. And, just like his other films, this is a film loaded with symbolism, metaphors, and is open to a vast number of interpretations. The music was just phenomenal. It kind of surprised me that there would also be some slight similarities to John Carpenter's score for Halloween. The brief (but appropriate) use of a Chris Isaak song just brought a devious smile to my face, and the classical music that is used is just something that is to be expected- and it works flawlessly. The acting is also quite good (yes, even Cruise for those haters and mockers). I feel like anyone who works with Kubrick is capable of giving an excellent performance- no matter who they are. Is this a perfect film? Well, based on my rating, and for a general audience, I say no. It is long, slow, and rather pretentious. Even though I raved about the music, I'll admit that the repetition of the piano notes can get a bit tedious and overbearing after a while, but at least it's only around in the second half. You need to be in the right frame of mind to watch it, and cannot do so passively. I spent most of the viewing time totally absorbed in it, but then got interrupted and found it hard to get back into, but that's a minor thing. It would probably help to view it at least twice (once again, like other Kubrick films), in order to get the most out of it. There's a lot to ponder over in this film, but the patient viewer will find themself greatly rewarded.