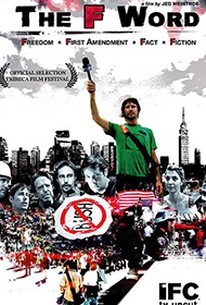 Writer/director Jed Weintrob takes a cue from Medium Cool director Haskell Wexler with this tale of a frustrated radio DJ who takes to the streets of Manhattan during the Republican National Convention. The Federal Communications Commission has slapped his station with $1 million in indecency fines, and popular radio personality Joe Pace (Josh Hamilton) isn't going down without a fight. As the streets fill with restless republicans, angry protestors, and other colorful characters, Joe arms himself with a wireless microphone and a portable transmitter in order to get the opinions of the average person on the street. The resulting film, which merges actual interviews with staged encounters, paints a vivid picture of a struggling media during a time in which a simple slip of the nipple and the subsequent extreme measures taken by the FCC sparked a fiery debate over "broadcast decency."

Reverend Billy
as Himself

Danzy Senna
as Danzy
View All

Critic Reviews for The F Word

There are no critic reviews yet for The F Word. Keep checking Rotten Tomatoes for updates!

Audience Reviews for The F Word

I got this confused with This Film is Not Yet Rated. I was going to turn it off, erase it or whatever, but I got sucked in almost immediately. It's about the republican convention in NYC in 04 and how it pissed off 500,000 people. Part freakshow, part stream of consciousness experiment. It's interesting, creepy and often fun all at the same time. I always knew I wasn't a republican but this movie made me think I'm not a democrat either.