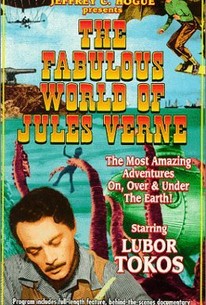 The Czechoslovakia-filmed Fabulous World of Jules Verne is based on the 1896 Verne novel Face the Flag. The story concerns the machinations of evil millionaire Artigas (Miloslav Holub), who plans to use a super-explosive device to conquer the world. Artigas operates from a pirate submarine, wherein he has imprisoned the explosive's inventor, Professor Roche (Arnost Navratil). One of the ships destroyed by the pirate sub includes among its passengers the scientist's daughter Jana (Jana Zatloukalova), who is rescued and spirited away to Artiga's headquarters inside an enormous volcano. Here Jana falls in love with Simon Hart (Lubor Tokos), Roche's assistant, who'd been abducted along with the Professor. Jana and Simon plan to escape the volcano in Artigas' observation balloon. Professor Roche, who foolishly believes that Artigas is a humanitarian, stays behind, but when he discovers Artigas' plans he sets off the explosive himself. The volcano is destroyed as Jana and Simon's balloon floats into the sunset. Fabulous World of Jules Verne is brilliantly filmed in a special process which causes every image on screen to resemble an old-fashioned woodcut engraving, replete with forced-perspective sets and props. The film's deliberately unrealistic visual texture, coupled with the slightly satirical, larger-than-life performances of the cast, make the delightful Fabulous World appear to be a 19th century "futuristic" novel come to life. For reasons best known to the distributor, the American version of this film is introduced by Hugh Downs. ~ Hal Erickson, Rovi

Narratively exquisite... Zeman culls from several of Verne's works, most notably the 1896 novel Facing the Flag.

One of the most superbly realized pieces of visual art to grace 1950s cinema.

a genuine cinematic marvel, a masterpiece of ingenious visual realization in which the screen is transformed into a living, breathing Victorian picturebook

This black and white film is based on several books by Jules Verne but primarily his 1896 book [i]Facing the Flag[/i]. The basic hook of this film being the unique approach to the special effects by director Karel Zeman. The plot sees a gang of pirates kidnapping a professor so they can get their hands on his new invention. Said invention being a powerful new weapon combined with special liquid which they want to use for their piracy. The pirates manage to kidnap the professor and one of his assistants and take them to their hidden base (inside a large remote hollow island). There the pirates provide everything the professor needs to build his weapon. In the meantime the assistant manages to get word to the outside world eventually leading to a British fleet arriving to deal with the pirates. The combination of live action and various forms of animation and effects were the way Zeman created his vision. Although this was not the first time he had taken this approach for his work. Zeman's 1955 film 'Journey to the Beginning of Time' also used a combination of live action, animation and hand drawn elements. The animation and effects in question for this film were stop motion animation, matte painting, miniatures, three-dimensional props and texture superimposition. Indeed the visuals in this film are quite astounding to say the least. I reckon most would be amazed to know this film was made back in 1958 as it could easily be a modern movie. Its not too hard to imagine Tim Burton being the director behind this feature with its steampunk imagery. Yes that's right I did say steampunk, this film could well be the first introduction of the popular Victorian steampunk/gothic subgenre (inspired by 19th century industrialism). If you take the visuals from Disney's 1954 movie '20,000 Leagues Under the Sea', put them in black and white, and then add the artistic style of using parallel lines (almost like cross-hatching with ink) across all props and sets, you have an idea if what to expect here. The stark parallel line imagery was in fact Zeman's attempt at recreating the old Victorian line engravings that were featured in the original Verne novels. This style actually works wonders in giving everything a very detailed and used appearance. The whole world we see in the film looks worn and weather beaten, as opposed to looking shiny and new. A technique we all know has been used effectively by a few directors and their movies in years since. The technique also gives the imagery depth and a grand old fashioned vibe which admittedly predominantly comes from when the film was made. Altogether it makes the whole affair look like a living comicbook or moving picture book. To be honest the film does come across as more of a living comicbook than a movie really. All you get is basically one scene after another showcasing a piece of machinery, or a vehicle, or a landscape etc...Its literally like watching panels in a comicbook one after another. There is very little dialog, sometimes narration, and sometimes nothing other than the moving imagery and the noise it makes. At times its almost like a silent picture but with fantastic visuals. I really can't stress enough how stunning this film looks at times. Sure some of the shots look a bit shaky, some look almost too much like an illustration, and in some the stop motion is pretty jerky. On the flip side some shots with live action elements are remarkable because you can't see the joins! The blend of the actors against moving three-dimensional props and background/foreground mattes, or drawings, is flawless. Overall considering the age of this movie what they achieved is incredible. Of course being a film based on Jules Verne you can't not have underwater sequences with the inevitable attacking giant squid. Its these sequences which mainly make up the most impressive and fantastical visual elements of the film. The imagination shown in these sequences is spectacular and have clearly helped inspire other filmmakers. Watching the various oddly shaped submarines (some with flipper-like paddles) and personal underwater pedal bike things, which the deep sea divers use, is glorious. I could feel my mind being cracked open...letting my imagination escape and run free. Apart from the slightly dated stop motion animation these sequences also highlighted some little errors which were amusing. Such as the divers moving perfectly normally underwater using their weapons normally. Also one sequence where a sub manages to find and pick up the hero from the seabed seemed a bit fortuitous and ludicrous. All in all its still impressive how they managed to convey the deep sea with mere sets, hand drawn props and a slightly wavy blur effect across the whole image. With a story based around pirates, mysterious islands, nautical swashbuckling, Nemo-like machinery and dashing Victorians in uniform, what more could anyone want? Beautifully lavish visuals that have clearly been given tonnes of attention; Zeman seems to have been a perfectionist for sure. The final results are clear to see. The plot may be thin on the ground but for anyone who appreciates the art form of stop motion animation along with ingenious high fantasy imagery, then this is for you.

On the way to visit his friend Professor Roch(Arnost Navratil) and assist him on a new invention, Simon Hart(Lubor Tokos) enjoys his journey while taking note of all the new wonders of technology. Since that new invention is a deadly new explosive, it should come as no surprise that the two men are kidnapped by the nefarious Count Artigas(Miroslav Holub) and taken to a secret island. "The Fabulous World of Jules Verne" is an entertaining film that is partially animated(through the wonders of 'Mysti-Mation!). This process works for the most part, even though the underwater scenes are a little underwhelming. Even then, the movie conveys as well as possible the rapidly changing world that Verne was experiencing on a daily basis in the 19th century. At the same time, it also anticipates what would come to be known as steampunk.