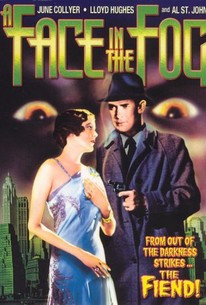 A Face in the Fog Photos

In this thriller, two newspaper reporters begin investigating a string of mysterious murders surrounding the production of Satan's Bride, a play. They are assisted by a doltish photographer. The playwright, an amateur sleuth, is also looking into the murders. More cast members die. The prime suspect is "The Fiend," a hunchback. It is later revealed that murderer is actually the playwright in disguise. This information jeopardizes the life of one of the reporters. Just before he is murdered, the other reporter shows up with the cops.

Robert B. Williams
as Policeman
View All

Critic Reviews for A Face in the Fog

There are no critic reviews yet for A Face in the Fog. Keep checking Rotten Tomatoes for updates!

Audience Reviews for A Face in the Fog

There are no featured audience reviews yet. Click the link below to see what others say about A Face in the Fog!

A Face in the Fog Quotes