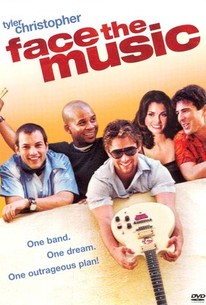 The fool-proof bid for fame made by a struggling rock band falls to pieces due to an unforeseen complication in a hilarious tale of misguided musical mischief starring General Hospital hunk Tyler Christopher. Sure, Dan Stone's (Christopher) band may have just been dumped from their record label, but they're still young and they still feel like they've got a few hits left in them. Of course, everybody knows that nothing rockets a band to the big time better than the death of a lead singer, and when the band agrees to fake Dan's death in exchange for some well-timed publicity, the plan pays off better than they ever might have expected. The trouble is, a beautiful female reporter has been assigned to investigate the mysterious death, and now, as her reporter's instincts lead her ever closer to the truth, the "dead man" realizes that the girl of his dreams is also the girl who could destroy his career if news breaks of the band's elaborate ruse.

Marshall Bell
as Tommy the Bartender
View All

Critic Reviews for Face the Music

There are no critic reviews yet for Face the Music. Keep checking Rotten Tomatoes for updates!

Audience Reviews for Face the Music

This movie has been listed as a "romantic comedy" and I heard that it won the BEST COMEDY AWARD at the Worldfest in Houston at 2001... I do not know who the critics were there but I believe that there were not many movies to choose from if this was their choice! I think it was the only choice and they never had a chance to see it! I am tempted not to waste my time on describing something which is definitely not art... low budget movie, screenplay bellow any average, a director who struggles with basic things... Maybe Tyler Christopher is a star now but I'll say that most of people can't stay awake during this torture. There is no wonder that it needed 6 years to find its way to a DVD! The story is so cheesy... a musical band with the singer Dan is trying to reach fame but nothing is happening... until Dan becomes Danielle... I really don't want to waste my time on rubbish like this!