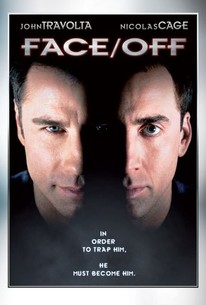 The third of John Woo's American-made feature films, Face/Off stars John Travolta as Sean Archer, an FBI agent obsessed with capturing Castor Troy (Nicolas Cage), a criminal genius who years before killed Archer's son while trying to assassinate the agent. Archer's single-minded pursuit of Troy has caused serious harm to his marriage, but Archer thinks the light may have appeared at the end of the tunnel when a seriously wounded Troy is captured in a bloody shootout. However, it turns out that Troy has planted a time bomb, with a biological payload that could destroy the entire city of Los Angeles -- and Troy isn't about to say where it is. The only other person who knows the bomb's location is Troy's brother, Pollux (Alessandro Nivola), who is no more helpful than Castor. FBI scientists hatch a plan: they have developed an experimental surgery which would allow them to graft Troy's face temporarily on Archer's head and allow him to question Pollux as if he were his brother. But after Archer has taken Troy's face, Troy regains consciousness and forces the doctors to give him Archer's face. Now the criminal mastermind has the FBI at his disposal, and the lawman is underground with few places to turn. Along with Woo's usual elaborately choreographed action scenes, Face/Off features a number of notable supporting performances, including Joan Allen as Archer's wife, Colm Feore and C.C.H. Pounder as FBI scientists, and Gina Gershon as Troy's loyal but long-suffering girlfriend. ~ Mark Deming, Rovi

Gregg Shawzin
as Lock Down Guard

I won't pretend that I completely enjoyed it, but it certainly has a few elements that I've never seen before. Action aficionados will undoubtedly slobber all over themselves.

For all its fiery explosions, Face/Off just kind of implodes.

It's sick, slick and sensational.

In Face/Off, Woo sweeps us away again, into a world of wild action, heroism, villainy and double faces that turn deadly.

Although the narrative is hysterical in its implausibility, the action portion of the film is reasonably effective.

Apart from enjoying the narrative hijinks, it's also fascinating to watch both actors interpret the demonstration of the respective transferences of character.

Everyone remembers Face/Off had awesome action and great performances but those weren't even the film's strongest asset. What makes Face/Off a profound film is how both Sean Archer and Castor Troy adapted to each other's lives.

Face/Off is a giant step for a filmmaker known more for action sequences than psychological insight.

An engaging and at times sophisticated story of identity and behavior, wearing the leering face of a farcical action cartoon.

What really makes Face/Off tick, what sells the movie more than anything else, are the dazzling performances from the two leading men.

This film might have been better if done with today's CGI. But then again, maybe not. The story's kinda foolish and no amount of modern technology can make it seem like Travolta can act. Travolta is the single worst element of this film -- his acting is so bad, it's a distraction.

"Face/Off is one of my all time favorite thriller/action movies. Travolta and Cage have great chemistry and I would really like to see them do another film together. They both play crazy well. Cage in the opening scene makes me laugh every time. I love him when he plays crazy.

The movie is about a terrorist named Castor Troy and the cop, Sean Archer who has a personal vendetta in putting him away. The movie is packed with action and great performances. This will always be my favorite Travolta and Cage film. "

I was far too young to fully appreciate this movie when it came out, but I remember my father and uncle continually raving about it, claiming it to be the best action movie out at the time! Upon watching this recently, I'm going to make a bold claim. I'd say this is one of the best action movies, period. I truly believe that Hollywood never saw the best of John Woo. However, if there were any movies directed during his foray into Tinseltown that even came close to the grandiose HK action belters he is famous for, Face/Off was the best of them by a stretch. The action sequences are haughty and adrenaline-induced! The opening and closing set pieces are particularly breathtaking. John Woo's famous 'bullet-ballet' is on full display, along with all the ridiculous firework-explosions, crimson backdrops, slow-mo diving shots, metal scenery, infinite-ammo weaponry and white doves we've come to expect from him! The premise of this film is deliciously ridiculous and adds a delectable flavour to the mayhem. The dialogue is over-the-top, stereotypical and campy in the way a 90s action flick's should be. The characters are incredibly archetypal; a madman megalomaniacal baddie and a downtrodden cop who deals with the death of his son by investing himself completely in his work (at the expense of tending to his family). Yet it all makes for a remarkable chemistry that works on every level! Special mention must go to Nic and John who play their parts so well, and each other's even better! Basically, I love this film! If you love action flicks, then watch it! NOW! You will not be disappointed! In fact, make a night of it! 'Con Air', 'The Rock' and 'Face/Off'. DO IT!