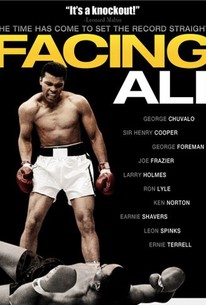 Muhammad Ali was arguably the greatest boxer of the 20th century, and that rare fighter whose presence in the culture of the day was equal to (or perhaps even greater than) his remarkable skills in the ring. Ali was a superb fighter who squared off against a variety of gifted athletes during his career, and filmmaker Pete McCormack offers a new perspective on Ali through this documentary, in which some of his opponents speak about their experiences with the man. Facing Ali includes interviews with Joe Frazier, who speaks of the bitterness that still remains of his rivalry with Ali; George Chuvalo, a Canadian fighter who recalls that while Ali defeated him, he went dancing with his wife afterward while the winner went to the hospital; George Foreman, whose memories include a powerful punch that Ali chose not to land; Leon Spinks, whose 1978 upset victory over Ali thrust him into a level of fame he was not prepared to handle; Ernie Terrell, who discusses the technique and strategy behind Ali's approach; and many more. Produced in association with Spike TV, Facing Ali was an official selection at the 2009 Los Angeles Film Festival.

... a dynamic portrait of the athlete and icon emerges through the remembrances, reflections and memorable quotes...

An honest and powerful documentary on the fighting career of Mohamed Ali as told by his opponents. Greatest boxer there ever was.

A good filn that talks with the boxers of the past when everybody knew who these boxers were along with the Champ Muhammad Ali. Ask anybody back between 1960-1978 who the Boxing Champ of the world was they would say ALI, ask today and 9 out of 10 people will say I don't know. The only dissapointing part of the film no modern day interview with Ali. Still 3 1/2 stars