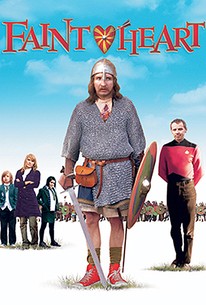 A man who enjoys living in the past is having a hard time dealing with the present in this comedy from the UK. Richard (Eddie Marsan) spends his days dealing with cranky customers at a big-box home improvement store, but on weekends he becomes a fearsome Viking warrior with a local role-playing group called the Bloody Broadswords. Richard and his best friend Julian (Ewen Bremner) help the group recreate centuries-old battles with all the realism their limited finances can muster, but Richard's wife Cath (Jessica Hynes) has lost her patience with him spending so much time with the Broadswords and so little time around the house. Richard's son Martin (Joseph Hamilton) is also grown tired of being dragged along to mock battles that earn him the ridicule of his schoolmates, even if his almost girlfriend Emily (Chloe Hesar) approves. Eventually, Cath gives Richard his walking papers, and while he tries to win her back, the fact she soon starts dating Gary (Paul Nicholls), Martin's gym coach, suggests he has a tough battle ahead of him. Meanwhile, Julian is having better luck in his love life when his girlfriend Maggie (Bronagh Gallagher) asks him to move in with her, but Julian's mother isn't pleased to learn he's finally leaving home. Faintheart was directed by Vito Rocco and written by Rocco and David Lemon, who documented the production and sought input from film fans via the social networking internet site /MySpace.

Tom Smith
as Danny
View All

The laughs come few and far between in a story as drab as the Northern skies under which it is set.

It all feels very samey, the comic potential of the mock battles never approached with genuine enthusiasm but treated as a mere gag, and one which soon outstays its welcome. Amiable yet underwhelming.

Faintheart is a wild folly. It's a romantic comedy devised, directed, cast, and produced by the online members of MySpace. In this slender respect it's a genuine sensation. But it looks and feels as knock-kneed as the ingredients.

Faintheart, which bills itself as the world's first user-generated movie, is a middling sitcom that could have crawled fully formed from the head of a jaded TV executive.

A British underdog comedy of no great distinction.

Despite the shameless Trekkie jokes and the fact it resembles a Martin Clunes sitcom, there's many a gentle chuckle to be enjoyed in this comedy about 'unleashing the hero within'.

It's tiresome in its own way.

What has emerged is an ordinary film that might have been made for television at any time in the past few decades.

Put away your eight-sided dice and go seek this immensely likable, sparky little comedy about fantasy, reality and love conquering all.

By Odin, it's a totally unexpected hoot.

No gimmick in the world can save this froth.

The internet is supposed to broaden our horizons, yet Faintheart feels like a return to the Dark Ages.

About as typical a brit romcom as they come, this just rises above the pack thanks to some genuinely funny moments performed by seasoned comedy performers (except Nicholls).