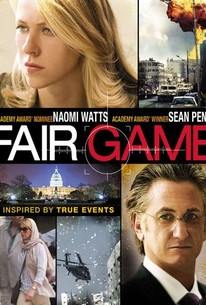 Critics Consensus: It struggles with the balance between fact-based biopic and taut political thriller, but Fair Game brims with righteous anger -- and benefits from superb performances by Naomi Watts and Sean Penn.

Critics Consensus: It struggles with the balance between fact-based biopic and taut political thriller, but Fair Game brims with righteous anger -- and benefits from superb performances by Naomi Watts and Sean Penn.

Critic Consensus: It struggles with the balance between fact-based biopic and taut political thriller, but Fair Game brims with righteous anger -- and benefits from superb performances by Naomi Watts and Sean Penn.

As a covert officer in the CIA's Counter-Proliferation Division, Valerie leads an investigation into the existence of weapons of mass destruction in Iraq. Valerie's husband, diplomat JOE WILSON (Sean Penn), is drawn into the investigation to substantiate an alleged sale of enriched uranium from Niger. But when the administration ignores his findings and uses the issue to support the call to war, Joe writes a New York Times editorial outlining his conclusions and ignites a firestorm of controversy.

Ghazil
as Minister of Mines - Niger

Fair Game was in no way a terrible movie, but with a scattered storyline and somewhat caricature-like performances by both leads, it failed to connect as it should have.

This isn't a message movie, per se, but a strong point of view comes through regardless: In the battle of principles vs. politics, politics always win.

Although the outline of this story is well known, Fair Game gives it dramatic shape and teases out the moral problems raised.

The script, based on memoirs of their experience by Wilson and Plame, has two stories to tell -- the run-up to Iraq, and the portrait of a marriage under fire -- and combines them very adroitly.

It's a thriller that shows the twists and turns of fate with some skill but also rages effectively against the way the most powerful usually win.

Watts and Penn are first rate as a married couple divided by their desperation to do right, while stylistically it's top notch.

Fine performances from both Naomi Watts and Sean Penn.

Thanks to the eyes of [Doug] Liman's lens and powerful performances by [Naomi] Watts and [Sean] Penn, with Fair Game we are given truth amidst psychological political intrigue. An undeniable winning combination.

Director Doug Liman does a good job of letting the story speak for itself, sparing the audience from too much soap-boxing. Watts and Penn are both solid, although Penn's performance does border on over-the-top in a couple of key scenes.

It should be gripping stuff, but Liman combines too much information with too much pontificating to create an uneasy blend of slow-paced political thriller and family drama.

A compelling and well-written political drama based on an outraging, shocking real story, and the most interesting is to see how the whole situation deeply affects the relationship between the characters, who are played so superbly well by Naomi Watts and Sean Penn.

During the run-up to the Second Iraq War, the Bush Administration released the name of a CIA agent whose husband was critical of Bush's "evidence." Naomi Watts and Sean Penn deliver very strong performances as Valerie Plame Wilson and Joe Wilson. Watts is believable in her vulnerable scenes, reeling from the Bush Administration's treason, and Penn brings his natural intensity to his portrayal of Joe Wilson. Both in terms of the film and the actual events, I wondered why (or why not) the Wilsons never discussed the article that led to Valerie's betrayal. Regardless of the film's reliance on actual events, the story proceeds predictably, complete with the inspirational visit to Valerie's father who dispenses age-old wisdom. The story of the Iraqi scientists is also incomplete. Overall, carried by strong leading performances, Fair Game is not as polemic as it could be and follows a rather predictable path.

"Fair Game" is not as engrossing as it should be considering its subject matter and pedigree.

I am NOT a political movie fan. However, this movie was extremely interesting. This would have been a fantastic movie even if it was fiction. But, what made this story frightening is that it was true. I remember the 2003 pre-Iraq invasion media blitz to bolster public support for the war. The real-life characters in this film, heroes, dared to speak the truth about the Iraq situation in an environment of blind frenzy disguised as patriotism. The tragic story of Joe and Valerie Wilson is amazing. The movie does a fantastic job of telling their story, and showing the emotional distress, that this moment of national shame caused the Wilsons. I only wish that I could have rewritten the ending...as that Karl Rove and Scooter Libby were sent to jail for life for treason!