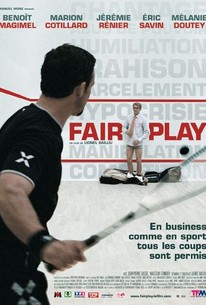 Filmmaker Lionel Bailliu expands his Academy Award-nominated short film Squash (2000) into a bitter and nail-biting commentary on the cutthroat nature of office politics with this feature debut concerning a shrewd businessman who takes his scheming employees on an ultra-competitive outing. Firm head Charles (Eric Savin) may be top dog today, but ambitious worker Jean-Claude (Benoît Magimel) is determined to make his way to the top no matter what the cost. Though his workmate Alex (Jérémie Rénier) is a nice enough guy, Jean-Claude is constantly digging for dirt on his fellow employees, and will not hesitate to exploit that information if it means the chance to get ahead. Now, as a humiliating game of one-upmanship emerges among the employees and Jean-Claude ponders just how to use the latest bit of incriminating information salvaged from Charles' loose-lipped secretary, Nicole (Marion Cotillard), the contentious office head announces a plan to take his workers on a high-energy outing that includes such potentially risky activities as rock climbing, white-water rafting, and navigating the treacherous stone underpasses of a seemingly bottomless subaqueous cavern.

[Bailliu's] corrosive humor will endear the movie to all those who enjoy the sight of the French behaving badly.

There are no featured audience reviews yet. Click the link below to see what others say about Fair Play!