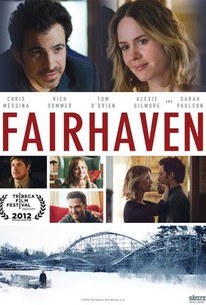 A former high school football star and one time college athlete, Jon has landed back in the place of his youth - Fairhaven - a small fishing village on the Massachusetts coast. Now in his mid thirties, and with the promise of younger days seemingly washed ashore, Jon's vague feelings of dissatisfaction are crystallized by a television interview with his football hero Tom Brady, who proclaims that, even after three super bowl wins, "There's got to be something more than this." (c) Official Site

Personal tenderness combines with a good sense of composition and a naturalistic storytelling style to give a small, familiar premise a nice lilt.

The cliché-infested script ... is long on booze-filled confessions.

While there's something undeniably fascinating about the way "Fairhaven" repeatedly avoids predictable payoffs for portentous dramatic setups, narrative momentum is conspicuous by its absence.

O'Brien and his castmates seem to play loose with his script a bit more than they should in an effort to give the material a lived-in feeling.

It has a nuance and a rumpled comfort with itself, which turns "Fairhaven" into an inviting place to visit.

[Director Tom] O'Brien never quite finds a focus around which to center the longing that all three boys/men feel.

The movie feels intimate and therapy-bound yet aesthetically remote.

It's difficult to dislike Fairhaven, because it is a promising, earnest effort.

Tom O'Brien smartly stresses realistic, submerged feelings instead of overwrought dramatics in his low-key portrait of friendship and all its complications.

With Fairhaven, O'Brien makes an understated, confident entrée into feature filmmaking, mining male relationships to poignant effect in his ... debut.

There are no featured audience reviews yet. Click the link below to see what others say about Fairhaven!