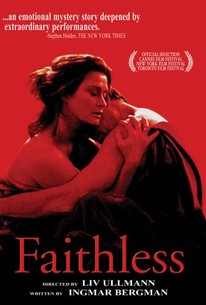 Critics Consensus: This brooding, measured look at adultery is ultimately emotionally riveting, thanks to its script and performances.

Critics Consensus: This brooding, measured look at adultery is ultimately emotionally riveting, thanks to its script and performances.

Critic Consensus: This brooding, measured look at adultery is ultimately emotionally riveting, thanks to its script and performances.

Ingmar Bergman wrote the screenplay for this drama of love, marriage, and infidelity, which was directed by one of his best-known leading ladies, Liv Ullmann. Bergman (Erland Josephson) is an aging filmmaker who invites an actress (Lena Endre) to his office to help him work on a character for an upcoming screenplay. The character, Marianne Volger (also played by Endre), is a well-known actress married to an internationally-successful symphony conductor, Markus (Thomas Hanzon). Marianne and Markus are close friends with David (Krister Henriksson), a filmmaker with a cavalier attitude toward money, career, and life in general. While Markus is away on one of his frequent concert tours, Marianne and David begin having an affair. When Markus finds out about his wife's infidelity, he files for divorce, demanding sole custody of their daughter Isabelle (Michelle Gylemo). Isabelle soon finds herself caught in the middle of an ugly war of wills between her mother and father. Faithless was screened in competition at the 2000 Cannes Film Festival.

Gertrud Stenung
as Martha
View All

It's all the more moving that, after half a lifetime, Ingmar Bergman and Liv Ullmann are still seeking illumination, and expiation, through the public yet intensely personal medium of film.

This could be a regretful remembrance of things past on the part of "Bergman" or it could be a pure fiction torn from the ether.

It's a movie that shows us that the silence between two people can be more dramatic than 100 pages of dialogue.

Bergman has been far better at working out these themes than anything in Faithless would suggest.

Without giving too much away, I can tell you that my response to these events was a thundering 'duh.'

If Ullmann has unquestionably appropriated from her years with Bergman (and Josephson) a magnificent empathy with her players, she is also rewardingly attentive to visual detail.

Faithless is an engrossing assertion of the Swedish art film director's propensity for profound navel-gazing into the morality of our actions.

While not to everyone's taste, the technical and narrative complexity alone are to be applauded - the film looks gorgeous, and the film is both literate and witty.

Faithless comes with a pedigree that's hard to beat.

Faithless is a journey worth taking, but it's best to travel alone.

It's a provocative, deeply detailed film, finely crafted both in the studio and in the editing room by Ullman. I'm not familiar with Ingmar Bergman's movies. I have not seen any of his movies till Faithless. I know it was directed by Liv Ulmann but written by Bergman. My friend told me, you will recognize Bergman's themes in almost all his movies.The movie showed an old man, representing Bergman,writing a new script for a movie. A lady accompanies him, telling him everything about her life, as a married woman, betraying her husband with his best friend and the consequences of her actions. The script seemed predictable, but was really surprising.I It was just something different for me but unbelievably good.