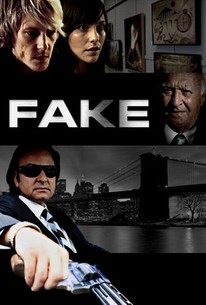 Gabriel Mann stars in this crime thriller, as Daniel Jakor, a struggling artist who has never managed to establish public recognition on par with the quantity of his output. His strongest abilities are tied to forgery, specifically flawless imitations of iconic artists such as Monet and Picasso. He soon gets sucked into the criminal underworld by Irish kingpin Seamus White (Robert Loggia), and soon disappears from view, whereabouts unknown. And it seems that the only individual capable of tracking him down is his ex-fiancée, a Sotheby's authenticator. As time runs out, she attempts to get to him before the FBI does. Meanwhile, Daniel himself sets out to double-cross the mob - with potentially disastrous consequences. ~ Nathan Southern, Rovi

There are no critic reviews yet for Fake. Keep checking Rotten Tomatoes for updates!

There are no featured reviews for Fake at this time.