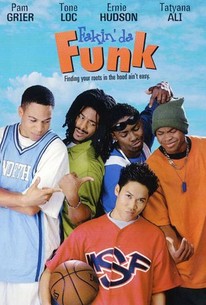 A theme of racial harmony underlies this comedy-drama. The couple Joe (Ernie Hudson) and Annabelle Lee (Pam Grier) learn the baby they are adopting is not black but Chinese. As Julian Lee (Dante Basco), reaches teen-hood, his father dies and the adopted boy moves with his mom to Atlanta. Here he hopes to make friends with the local teens, who are somewhat perplexed by the Asian-American's hip-hop slang and high scores when he grabs the basketball. Julian intervenes when his younger brother Perry (Rashaan Nall) falls in with local gangsta Frog (Tone Loc) and his group. Meanwhile, in a parallel plot, similar problems surface for clueless foreign-exchange student May-Ling (Margaret Cho). She's baffled to find herself living with a black family, a situation leading to inventive cross-cultural comedy. The film's soundtrack combines hip-hop, funk, and Asian instrumentals. Shown at the 1997 Hamptons Film Festival.

While it's no great work of cinema, this movie about serious racial issues is a lot funnier than you might expect.

Adorable movie. At times cheesy, a little corny, but sweet and without missing the point. Dante Basco is clearly "down with the brown" in this 90s "erase the color lines" film about a Chinese boy adopted by black parents who eventually move from Atlanta to South Central. Hilarity, of course, ensues. A second story involves a Chinese exchange student (played by the comic Margaret Cho) gets sent to the "wrong hood" and is taken in by a black family as well, played by John Witherspoon (Boondocks), Nell Carter, and Tichina Arnold (Everybody Hates Chris). I enjoyed it. I'm a fan of these kinds of flicks, especially the comedy. It was also a trip seeing various known black actors in their youths, like Duane Martin and Reynaldo Rey. If you're bored and looking for a cute, funny popcorn movie to bide your time, check it out.