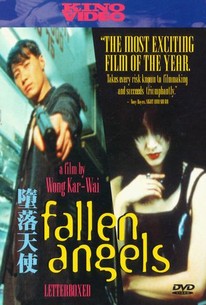 Wong Kar-wai's Fallen Angels is a sequel of sorts to the director's 1994 U.S. breakthrough Chungking Express. Expanding on the latter's style, themes, and mood, Fallen Angels is set in the surreal milieu of urban, nighttime Hong Kong. As with the filmmaker's other features, plot takes a back seat to mood. The wisp of a narrative intercuts two story lines. The first follows a hitman (Leon Lai) who finds that the assassin's life has slowly lost its allure. Complicating his life is his beautiful contact (Michele Reis, a former Miss Hong Kong winner) who pines after him with fetishistic ardor, although the two have never met in their nearly three-year partnership. In another part of the city, He (Takeshi Kaneshiro), a mute, boyish ex-convict, makes a living by sneaking into and running businesses after hours. Still living with his father who runs the Chungking Mansions hotel, the restless Ho falls for Cherry (Charlie Yeung), a woman getting over her breakup with the offscreen Johnny. The movie follows these episodic romances almost half-heartedly as with Wong's other films, and digressionary moments attract much of the camera's distracted gaze. This visually stylish and unabashedly effusive work is considered by some critics to be the quintessential Wong film.

Takeshi Kaneshiro
as He Zhiwu

An exhilarating rush of a movie, with all manner of go-for-broke visual bravura that expresses perfectly the free spirits of [Wong's] bold young people.

A densely packed suite of zany vignettes that have the autonomy of pop songs or stand-up comic riffs.

I felt transported back to the 1960s films of Jean-Luc Godard. I was watching a film that was not afraid of its audience.

Wong brings tremendous vigor and audacity to the effort, asking us to question the most basic rules of storytelling and commercial filmmaking.

The second tale is a disarming yarn.

There's a lot to like here, from the moodiness of Hong Kong to the music, to Wong Kar-wai's signature stunning lighting.

The film is Wong's most visually striking, with Wong and Doyle constantly inventing intoxicating new angles for every shot.

Photographed by expat Australian Christopher Doyle, Fallen Angels is cinematic exuberance in the hands of a confident filmmaker who builds a montage, and serves you a smorgasbord of images and characters that inhabit a world you are invited to experience.

A brilliantly innovative filmmaker who gets his feelings across through the cheeky and sometimes surreal visuals and his cool style of filmmaking.

Fallen Angels lunges and chases after its rapidly receding subjects, looking to capture and preserve a trace of their presence before the sun rises and the shadows fade.

Stylish and mesmerizing... Equals the poignance of Chungking Express.

UPDATE: Just discovered that Fallen Angels is out on DVD and I can watch it. Will buy it soon and re-watch it and then re-review it........soon Fallen Angels is the story of a professional killer in Hong Kong. It follows the in's and out's of his job and his partner in crime who he rarely sees. After 3 years of working together, he wants out. Another sub-plot is about a mute (caused by eating expired cans of pineapples for a month, after he was heart broken) who breaks into restaurants, cafés and ice-cream trucks at night and forces people to buy his goods! Wong Kar Wai?s fifth directorial film in 1995 and which was originally meant to be part of Chung King Express was a good film but not great. For me it seems incoherent and the characters just don?t seem to be able to hold the narrative well as I thought. There great parts of the movie are as follows; the stunning cinematography done by frequent collaborator, Christopher Doyle really captures the mood of Hong Kong well and the themes brought up in the film. Such as alienation from others, which I believed that was shown well. Once again, Wai leaves hints of trademarks around the mise-en-scne. For instance during the film, there are constant references to the weather, and how it?s raining. Which has been featured in Chungking, In The Mood For Love, Happy Together amongst his work. There are also subtle hints in the background, through radio and TV, which reflects Hong Kong?s news, which is currently going on. What is done well is the usage of language, we see the news in English, French and Mandarin of course- that reflects well the era in which it was done in. The camerawork is something, which I haven?t seen in his work before. The close-up camera work is effective and does make the audience understand the characters well and their thoughts and feelings. However, what also this creates is a colastrophic atmosphere that these alienated characters are finding themselves in most of the time and you do feel like you are intruding in their lives at times. The narrative, as I stated before, is a little confusing. However the narrative with He Zhiwu I was able to understand. Once amusing scene was when he was massaging a pig, which probably fitted well with his character?s personality. He was a mute, but I felt more sympathy for him that the other characters within Fallen Angels. Perhaps the camera-work made the film, for me, seem a little slow-paced and out of sorts. Overall, Fallen Angels is worth the watch but is not of of his better movies. For me Chungking, its predecessor is far superior and has that quirkiness about it, which you cannot not like. This, perhaps, is a darker versions of that and delves deeper into what really is going on in these disillusioned people. If you haven?t watch Wai?s excellent work, start with his most recent work as it?s far better. Fallen Angels is superior to Days of Being Wild and As Tears Go By

Netflix somni-bomb. All style, mood and colors. It literally took me three months to get through this frickin' movie because it kept putting me to sleep. So cool it's dead.

Bleh, Wong Kar Wai...at least he had the decency to show Michelle Reis touching herself.

Life, maybe, turns on coincidence or is directed by fate -- your choice -- or maybe not : ) Sometimes it seems as if we do live in a very small world, although sometimes it is so huge and impersonal that we don't even recognize our former lovers. This elastic size of the world can make love hard to find, and it can make it easy. If you find love, however, will it last? Love of family is the most stable kind of love, but even that cannot, in the world of the living, last forever. Another very bittersweet experience from Wong.