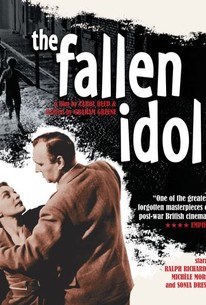 Adapted from the Graham Greene story The Basement Room, director Carol Reed's The Fallen Idol is told almost completely from a child's eye view-but it isn't a children's story. Young Bobby Henrey idolizes household butler Ralph Richardson. Therefore, when it seems as though Richardson might be implicated in a murder, Bobby does his best to throw the police off the track. The boy succeeds only in casting even more suspicion upon Richardson. As the story progresses, Henrey's hero worship is eroded by Richardson's shifty behavior, and even more so when the boy discovers that the butler's boasts of previous heroism are just so much hot air. The ending of the film differs radically from Greene's story. While it would seem that director Reed was merely paying homage to the "happy ending" philosophy (hardly likely, given the doleful climaxes of such films as Odd Man Out and The Third Man), the director had very solid reasons for altering the story: he was more fascinated by the concept of the boy's imagination nearly sending his idol to the gallows, rather than having the butler entrapped by facts. And though the ending is happy for the boy, the butler's fate is much more nebulous. ~ Hal Erickson, Rovi

Torin Thatcher
as Policeman `A'

James Swan
as Policeman
View All

Critic Reviews for The Fallen Idol

The Fallen Idol finds innocence and inquisitiveness at odds with corruption, violence, desire, deceit - all the stuff that grown-ups trade in.

The Fallen Idol stands as one of the great films about looking, about perspective, about the way we watch and interpret not just film plots but each other.

As a portrait of the sometime destructiveness of innocence and as a sharp fresco of post-war Britain, this movie is a little masterpiece, an idol that has never fallen.

It's a masterful and unsentimental child's-eye view of the cold, hard adult world.

Remains one of those classics that makes you thankful you haven't seen them all.

It's all quite moving and nerve-wracking - and believable.

One of the movies' great treatises on the projection and (ultimate) limitations of a child's inner-world.

Written by the great Graham Greene, the film builds up pressure subtly over time, creating an entire narrative around the cascading consequences of dishonesty.

The Fallen Idol is a fascinating film for how it manages to develop inner turmoil and for its earnest interest in the perspective of a child.

The Fallen Idol is one of the best achieved examples in cinema of seeing the world through the eyes of a child.

In some ways an even more brilliant contraption than "The Third Man," and with a third act that might be superior, too.

Audience Reviews for The Fallen Idol

Nicely executed by Richardson and the rest of the cast. One of the best of the British thrillers.

Lies, sometimes, are an act of kindness. Many times I hasten to add. The imagination of a lonely child is ignited by a meek man in love. The man, as played by the extraordinary Ralph Richardson, is a mass of contradictions and yet we understand him. Married to a shrew and in love with Michele Morgan no less. Carol Reed is not a director that comes immediately to mind when one lists the greatest directors of all time, but in my book, is right up there with the very best. No other director has been able to bring Graham Green to the screen with its spirit so gloriously intact. Guilt and fear as riveting entertainment. Suspenseful, funny and beautiful to look at. Go try to top that.

Literally about a boy who idolizes someone and finds out their not all that they thought they were. An okay movie, but not very exciting.

With more suspense and twists than half the "thrillers" out there today. Bobby Henrey would eat HJO for breakfast.