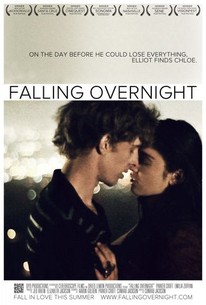 Falling Overnight tells the story of twenty-two year old Elliot Carson on the day before he has risky surgery to remove a brain tumor. Facing what could be his last night, Elliot's path intersects with Chloe Webb, a young photographer who invites him to her art show. Elliot welcomes the distraction and as the night descends, Chloe takes him on an intimate and exhilarating journey through the city. But as morning approaches, and Chloe learns of Elliot's condition, the magic of the evening unravels, and they must together face the uncertainty of Elliot's future. -- (C) Official Site

Conrad Jackson
as Greggers
View All

Seems designed to have a love-will-find-you serendipity about it, but instead comes off as formless and inane.

The film's sweetness is endearing but too featherweight to engage.

A lo-fi romantic drama that isn't awash in self-pity or -aggrandizement, Conrad Jackson's Falling Overnight is something of a rarity.

Recalls some of the more annoying entries in the mumblecore subgenre that erroneously believe that every indiscriminate moment in a person's life is worthy of a film regardless of subtext.

Rarely has a romantic drama been made with such genuine, pure, unadulterated emotion. Emilia Zoryan delivers a radiant, well-nuanced performance.

Completely bare bones, "Falling Overnight" is a love story using the streets of Los Angeles as a backdrop. Presented as completely natural, it embodies a quality of independent film-making that projects every day life in the most interesting of ways. Despite this ability to appear organic, the presentation often falls short of actually connecting, delivered too haphazard and with too much freestyle. What helps the film come off natural is the fact that the leading actors are fairly new to acting, having appeared in just a few things prior to this film. They have a vulnerability and nakedness to the lens that leaves them wide open, appearing sincere and genuinely filled with emotion. However, seasoned actors have proven far better in roles like this, for example Anton Yelchin and Felicity Jones have a much more impressive showing in "Like Crazy", another authentic love story that strictly focuses on the evolution of love with a realistic and unabashed way. Rising above the more melodramatic fare in the independent drama genre, the distinct plot helps carry the film along in memorable fashion. Our lead, Elliot Carson (Parker Croft) prepares to have brain surgery in the morning, a risky operation that could lead to the worst possible outcome. Keeping his parents at a distance and having no real friends to speak of, Elliot uses a chance encounter with the adorable Chloe Webb (Emilia Zoryan) as a welcomed distraction. Traveling between an art show to house party to biking through the L.A. nightlife, the characters form a connection, with the innocence of new love briefly eclipsing Elliot's pending condition. Yet even with that innocence, these young characters project a maturity that lets them deal with these complicated issues in their own adult ways. The chemistry is undeniable between Croff and Zoryan, playing off each other as if there is no script, with the dialogue coming off very spontaneous and authentic. The only problem I had with the film spawns from that spontaneity, which often results in strange sidebars that have no real connection to the plot and only land in the film to either pad the runtime or to profess a reality that either the writer, director, or actor feels strongly about. Coming off too real, or coming off as if the director simply turned on a camera and let life play out in front of it, is not what an audience wants to see from a fictional piece. Most of the scenes in the film do feel natural and do still hold a quality of cinematic enjoyment, watching this young love blossom despite the pending doom that hangs over one of the characters. Emilia Zoryan, in particular, commands her delivery and holds a poise that is much sturdier than her counterparts. Sincerity fills the film, and nothing brings this out more than the music throughout, especially captured by my favorite moment, as the birthday party disperses to a tunnel concert where the artist Emperor X is performing a song called "Addison Acceh" which he strums and screams beautifully. This moment made the film for me, and years from now, when I remember this film, it will be this small scene that comes to mind. With the ability to evoke emotion with very little effort, this little drama works just fine as a low budget, independent love story. However, having witnessed so many other films from small-time directors accomplish the same level of emotion with even more brilliance and truly stand out performances, it is hard to say that "Falling Overnight" is a complete success. But for what it is, the film captures a sentiment and is a respectable first feature from director Conrad Jackson, especially considering his involvement as executive producer on the wretched 2009 surf drama "The Outside".