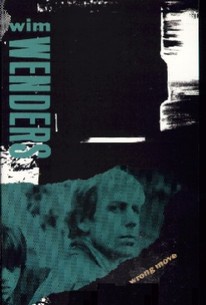 The Wrong Move and The Wrong Movement were the English-language titles for German director Wim Wenders' Falsche Bewegung. Made for television, the film is an update of Goethe's Wilhelm Meister. Ruediger Vogeler plays aspiring writer Wilhelm Meister, who goes on a long odyssey in the woods in search of truth. His companions on this journey are pragmatic Therese (Hanna Schygulla), bisexual Mignon (Nastassja Kinski, billed under her real name, Nakszynski), Mignon's hippielike boyfriend Laertes (Hans-Christian Blech), and artistically bankrupt poet Landau (Peter Kean). The foursome accept the hospitality of an industrialist (Ivan Desny), who unbeknownst to all but himself is a deeply troubled ex-Nazi. Novelist Peter Handke wrote the screenplay for Wrong Move.

There are no critic reviews yet for Falsche Bewegung. Keep checking Rotten Tomatoes for updates!

Can't say much about it. I have non-defined feelings toward it. The beginning is pretty good, what maybe let me expecting too much. It seems Wim Wenders had a great idea in mind and good work in hands, but that it didn't turn up in the best way. I am not sure if I give three or three and a half stars, because "Wrong Move" has something...
*First movie of a very young and pretty Nastassja Kinski.