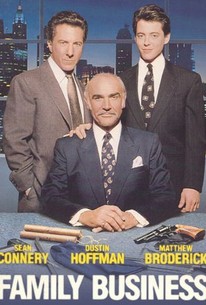 You've probably already guessed that the Family Business in this all-star melodrama is the business of crime. Adapted from a novel by Vincent Patrick, the film stars Sean Connery as Jessie McMullen, the patriarch of a family of career criminals, including his son Vito (Dustin Hoffman) and grandson Adam (Matthew Broderick). Vito has gone legit, but college-educated Adam remains loyal to his grandfather. Reluctantly, Vito joins his father and son on a big-time heist involving millions of dollars' worth of test-tube specimens. There's many a slip-up and betrayal before the three generations can find a common ground.

Thomas A. Carlin
as Neary

Jack A. O'Connell
as Police Lieutenant

Elizabeth A. Reilly
as Phil's Girlfriend

Kas Self
as Stand-in for Mr. Hoffman

Marilyn Cooper
as Rose
View All

All of the scenes establishing the characters and setting up the caper are joyful to watch, mostly because of the rich comic exaggerations of the Connery character.

The pleasure is watching Connery shine as a roguish criminal in a story line that never gels.

A terrific seriocomic crime caper that nobody knew how to sell. Often feels like a 1970s movie that somehow ended up in 1989.

a bit of a mess

Utterly forgettable, even with its great cast

Just barely worth checking out, and even then, it's only for the actors.

Three generations of robbers, played by top actors, creates an interesting chemistry and chance for fun scenes. The relationship between the grandson (Matthew Broderick) and his grandfather (Sean Connery) is cool; the spike is with the daddy Dustin Hoffman. There's some sadness to be expected with the fun, however.

Should have been a much better film. It's all rather bland.

Bloody dull drama about a three-generation crime family and this is one of my worst Sean Connery, Dustin Hoffman and Matthew Broderick's movie.

Cliched heist comedy drama that expects you to believe Sean Connery, Dustin Hoffman and Matthew Broderick are three generations of some kind of criminal dynasty. Feels like a loose collections of unconvincing mafioso sketches that relies entirely on the star names to gain credibility. It doesn't.