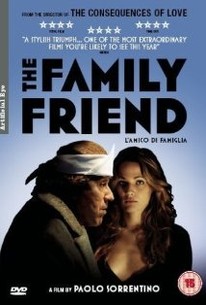 In writer/director Paolo Sorrentino's second feature, The Family Friend (L'Amico di Famiglia), Giacomo Rizzo stars as Geremia de Geremei, a sixtysomething tailor who lives with his mother in a disgusting and decrepit flat. Though wealthy from the money that he has culled via loan-sharking, Geremia is a thoroughly miserable wretch, driven into the throes of destruction by his own incredible selfishness and his obsessive infatuation with a beautiful local girl, Rosalba (Laura Chiatta), whom he meets when asked to assist with her wedding. Geremia agrees, but takes the bride off alone and pressures her into sex, little realizing that he's sowing the seeds of his own downfall. Meanwhile, a bidet supplier attempts to goad Geremia into giving him a massive loan -- an amount that Geremia could never possibly fork over. Throughout the film, Sorrentino packs in numerous surrealistic touches, from the sight of a nun buried up to her neck in sand (accompanied by an aural assault on the soundtrack) to a grotesque glimpse of Rizzo with a potato poultice around his head to the jarring sight of Geremia's village, built by Mussolini on an Italian swampland. In the process, Sorrentino manages to create his own distinct world and thoroughly unforgettable characters. He also pulls off an incredibly difficult feat, by enabling the audience to care about a markedly unpleasant central figure. ~ Nathan Southern, Rovi

Endlessly infatuated with its own cinematic flamboyance, Paolo Sorrentino's latest aims for profundity but has no more substance than the average flashy TV commercial.

Cuts a fine balance between the stylised and the austere.

A single viewing doesn't do justice to this film's singular visual imagination.

Artistically, this scathing assault on human frailty couldn't be more accomplished. But there's something mechanical about the central characters' cynicism and their ultimate abasement.

All the surface style is properly wrapped around ideas of substance.

The film fails singularly to provide any character worth caring about.

Sorrentino is often accused of being all style and no substance, but on the contrary his films are carefully built around the contrast between surface appearances and hidden depths.

For many directors this would be counted as a considerable success, but from the director of The Consequences Of Love, it seems like a disappointment. It's smart, it looks great and there are fantastic characters, but the motive power just isn't there.

Wrangling the characters in vividly coloured tableaux, he dazzles the viewer with an array of enigmatic images.

The entire film is subdued, but film fans who are fed up with nonstop action will love it.

Whereas Tita, the protagonist of Le conseguenze dell'amore, was a gracefully desperate man, Geremia is just plain ugly.

Paolo Sorrentino's third feature The Family Friend expands the maverick helmer's singular vision, though this time he's crafted a more complex world to illustrate his philosophy: everyone steals, and everyone is unhappy.

Unusual and uneven tale of an unattractive small time loan shark and his trouble with women. Admittedly stunning visual style and left field music can't quite compensate for the willful eccentricity which often seems forced and unnecessary.