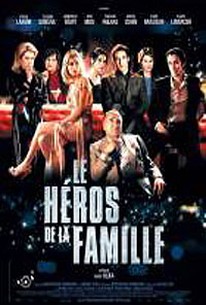 A down-and-out sleight-of-hand artist tries to pull off the trick of a lifetime by keeping a decaying cabaret in business in this comedy-drama with music from director Thierry Klifa. Gabriel Stern (Claude Brasseur) has spent over four decades running the Blue Parrot, a Parisian nightclub where he regularly appeared in a drag act as "Gabriella." One evening, a weary Gabriel asks his friend and confidante Nicky (Gerard Lanvin), a magician who regularly appears on the Blue Parrot's stage, to finish closing up the club so he can go home. Nicky agrees, and the next morning he gets the sad news that Gabriel died in his sleep. Gabriel's son and daughter, both in their thirties, come to Paris to handle the funeral details -- Nino (Michael Cohen), a gay accountant who brings along his younger lover (Pierrick Lilliu), and Marianne (Geraldine Pailhas), who edits a well-known magazine for women. Also on hand are Simone (Miou-Miou), Gabriel's ex-wife, Marianne's mother and Nicky's former co-star; Alice (Catherine Deneuve), another of Gabiriel's exes who's also Nino's mom; and a number of the regular performers at the club. When Gabriel's will is read, to the surprise of many the ownership of the Blue Parrot is handed over to Nino and Marianne; the two have no interest in running a nightspot and announce the place is up for sale. Nicky wants to keep the Blue Parrot open, but doesn't have the money to buy the club, even though Gabriel's ghost frequently visits him, imploring him to find a way to prevent it from closing. Le Heros de la Famille (aka Family Hero also stars Emmanuelle Beart and Valerie Lemercier as members of the club's stable of regular performers.

Eléonore Gosset
as Véra
View All

There are no critic reviews yet for Family Hero (Le Héros de la famille). Keep checking Rotten Tomatoes for updates!

There are no featured audience reviews yet. Click the link below to see what others say about Family Hero (Le Héros de la famille)!