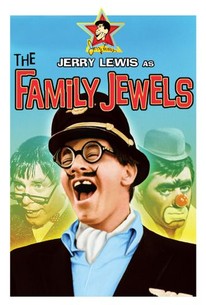 As if one Jerry Lewis wasn't enough, The Family Jewels offers no fewer than seven Jerrys. Fans of Lewis will like the film. Others should be advised to steer clear of any and all French film festivals. The plot revolves around nine-year-old Donna Peyton (Donna Butterworth), who stands to inherit 30 million dollars. The catch: Donna must pick a new daddy from her late father's six closest male relatives. Lewis spends most of the film playing family chauffeur Willard Woodward, whom Donna loves above all others. He also portrays snaggle-toothed gangster "Bugs" Peyton, hirsute sea captain James Peyton, flying fool Captain Eddie Peyton, cynical clown Everett Peyton, Holmes-like detective Skylock Peyton (whose "Dr. Matson" is corpulent Sebastian Cabot), and photographer Julius Peyton (a reprise of Lewis' Nutty Professor character Julius Kelp). Though fitfully amusing, The Family Jewels is too sloppily put together to completely satisfy anyone other than Lewis' most fervent fans. Best bits: the in-flight movie starring Anne Baxter, the marathon pool game, and Bugs Peyton's outrage at being called a rat fink.

Anne Baxter
as Actress in In-Flight Movie
View All

News & Interviews for The Family Jewels

View All The Family Jewels News

Critic Reviews for The Family Jewels

Lewis makes the camera a prism to break out the divergent, and even conflicting, strands of his own character.

With The Family Jewels, Lewis seems more willing than ever to acknowledge his own hostility towards being dismissed as a kids' entertainer.

Since I find one Jerry Lewis too much, seven of them was way too much for me to handle.

Jerry Lewis romp that gives him multiple characters for laughs.

Audience Reviews for The Family Jewels

There are no featured audience reviews yet. Click the link below to see what others say about The Family Jewels!